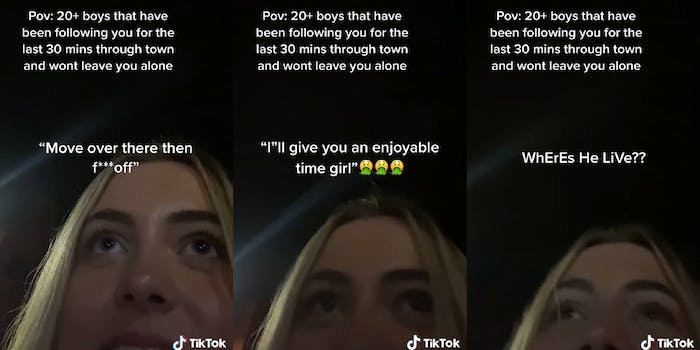 She said they had been following her for 30 minutes.

A disturbing TikTok that shows a young woman putting up with men harassing her on the street late at night is the latest video drawing attention to the perpetual issue of catcalling.

18-year-old Madeleine Lou Marsh kept her camera focused on her face as she captured the sounds of a large group of guys hounding her.

“Pov: 20+ boys that have been following you for the last 30 mins through town and wont leave you alone,” she wrote over the footage.

In the video, Marsh keeps a smile on her face as she deflects their inappropriate remarks and questions, which she notes was “because [she was] nervous not bc [she was] happy.”

“I’ve got a boyfriend,” she says in response to a request for her SnapChat.

The voices blend together as they call out things like “fuck your boyfriend” and “I’ll give you an enjoyable time, girl” and “move over there, then, fuck off.”

“I’ll see you later,” she says as she finally seems able to shake the group.

The video is a harrowing look at what women and girls regularly encounter, and is especially relevant given the conversations surrounding the Sarah Everard case in the U.K. right now. Everard was walking home one night doing everything “right”—sticking to main roads, speaking on the phone to her boyfriend—but at some point during that trip, she still disappeared.

Her body was eventually found several days later, and a police officer was arrested in conjunction with her abduction and murder. The ghastly case has ignited fears over women’s safety even walking familiar and reasonably routes in their own cities—something that is always of concern but is now at the forefront of people’s minds, particularly in the UK.

And Marsh’s experience only serves as a reminder that upsetting and potentially dangerous incidents aren’t something that can simply be written off as unlikely to happen. Rather, they can happen to anyone, at any time.

“That’s terrifying, a whole group??” one user commented. “It’s scary that they don’t understand how intimidating that is.”

A more cynical viewer responded that “they do understand how intimidating it is and use it to … their advantage.”

One woman pointed out that “whichever response [women] give to these situations either talking back or ignoring them … WE’RE SEEN AS IN THE WRONG.”

And while most commenters were sympathetic to what Marsh went through, and many even shared their own similar experiences, there are always people ready to demonstrate that they just don’t get it.

The teen shared one response in particular in a separate video that features both her and her boyfriend simply staring at the camera: “Damn you’re pretty fine tho I would harass you as well,” it read.

“One of the many many reasons I hate men,” @daisyhorgan replied to that abhorrent response to what Marsh went through.