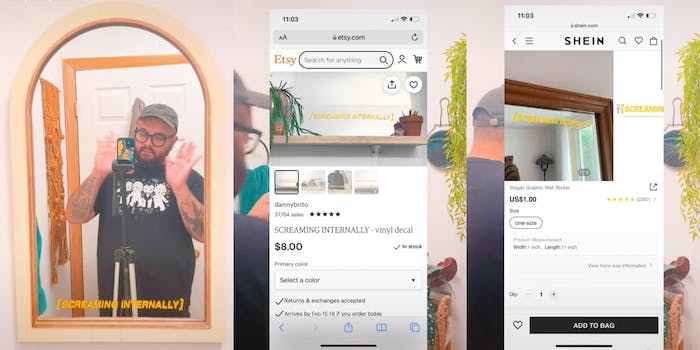 ‘No contact, no apology, no compensation’: Artist alleges Shein stole his sticker design in viral TikTok

'I've been selling it consistently in my shop for four years.'

A graphic artist and TikToker is claiming that Shein stole his sticker design in a viral TikTok.

Shein, a Chinese online fast fashion retailer, has previously been accused of stealing from small designers and selling their designs without permission. TikToker Danny Brito (@shopdannybrito) appears to be the latest independent artist to experience this.

The TikToker shared his allegations in a video captioned, “shein sucks, don’t shop on their site.”

The allegedly stolen design is Brito’s mirror sticker, which says “[screaming internally]” as a reference to the meme. While he does not claim ownership over the phrase, Brito told the Daily Dot that he came up with the idea to create the mirror decal in 2018. Brito claims Shein has been selling his design on their site since January 2021.

“You might be saying to yourself ‘Danny, it’s just some letters. How can they copy that?'” Brito said in the video. “But, I had the idea to turn this meme into a mirror decal four years ago, and I’ve been selling it consistently in my shop for four years.”

Brito has the sticker listed for $8 on his Etsy shop, dannybrito, which has made 37,668 sales overall with a five-star rating. The Daily Dot was unable to locate Brito’s design on Shein’s website, but a web search for the product provides a now-broken link to the page where the sticker was apparently sold. A screenshot Brito shared in his video shows the design selling for $1 with 2,297 reviews.

Brito told the Daily Dot that a follower informed him about Shein’s listing on Feb. 9. He said it “appears to have been removed on Friday morning” but he says he didn’t receive any notification about it from Shein.

In his video, the TikToker said it’s “really unfortunate” that Shein stole not only his design, but also valuable income that he would have made from it.

“So I’m making this video in hopes that Shein sees it and you know, takes down that listing. And hopefully I get some kind of compensation for this clusterfuck of a problem,” Brito said in the TikTok.

His plan doesn’t seem to have worked yet, though. In another TikTok posted two days ago, Brito shared that he had received, “no contact, no apology, no compensation.”

Viewers voiced their support and condolences for Brito in the first video’s comments.

“It’s not just some letters,” one viewer reassured Brito.

“They didn’t just steal the letters they stole your whole design! Color and all,” another viewer commented.

Another TikToker wrote, “God they do this ALLLL the time. I’m so so sorry. This blows.”

Several viewers said they would buy a sticker from Brito’s shop to support him and help make up the lost income. Some tagged Shein in their comments, calling out the company for allegedly stealing the design.

“@SHEIN whatcha gotta say for yourself? SUPPORT YOUR LOCAL ARTISTS!!” one viewer said.

Another user wrote, “@shein_official is that person that says the joke that you just said but louder so everyone thinks they thought of it.”

As of writing, Brito says he has only received a response via “bot” on Instagram. He hopes the company will admit fault and offer compensation.

The Daily Dot reached out to Shein via PR email.