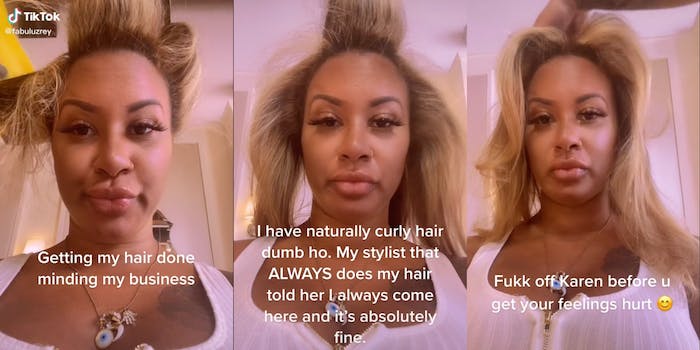 ‘F*ck off before you get your feelings hurt’: Salon ‘Karen’ lectures Black TikToker about curly hair

'Come to get your hair styled with your hair already styled next time.'

In typical “Karen” fashion, a Milwaukee salon owner allegedly stuck her nose into a Black client’s business during a hair appointment.

The client, @fabuluzrey or Rey on TikTok, shared her synopsis of the interaction in a TikTok video that has received 1.6 million views.

Rey said she was getting her hair done, minding her own business when a “stupid bitch” decided to mind her business for her. The woman, who Rey later said is the owner of the Drybar salon, allegedly told Rey to come with her curly hair combed out before her next appointment.

Viewers were confused why a hair salon client would do their own hair before going to a hair salon.

Shaking her head and rolling her eyes, Rey explains in the video that she has naturally curly hair. Her stylist, who always does her hair, told the owner that Rey always goes to Drybar and it’s “absolutely fine.”

“Fuck off Karen before you get your feelings hurt,” Rey says.

After the clarification from the hair stylist, Rey says the woman kept apologizing to Rey, but her response was “bye ho.”

Viewers also said that that the “Karen” was actually the owner of the salon.

“I know this location well… it’s a franchise location, and that’s the owner. She’s not a stylist and shouldn’t be making comments on hair at all,” one user commented.

A different user said they also have naturally curly hair and go to Drybar all the time.

In a follow-up TikTok, Rey said she also goes to Drybar all the time because it’s convenient for her.

She said she’d never seen the owner before but noticed her staring as she got her hair blown out. It got rude after a while.

The woman came over and flatly told Rey to have her hair combed out next time. Rey says she asked her, “You do realize my hair is curly, right?” The woman said the salon was beginning to charge patrons extra for combing out tangles. She says the woman gave her a card saying something like, “Have extra tangles? Call ahead and let us know.”

That was when the stylist came to Rey’s defense. But that time, Rey was heated. The woman told her she never knows when people have combed their hair in a day versus a week or month, and sometimes it just takes too long for a stylist to do it for them.

“Do I look like a woman that wouldn’t comb her hair for three weeks?” Rey says in the video.

Rey, who did not immediately respond to the Daily Dot’s request for comment, adds that she won’t return to that salon again.

Viewers were disgusted. Some said the incident was racially motivated, and the majority agreed that it was at least “unprofessional.”

“Shame on her!” one user commented. “Your hair is gorgeous!”