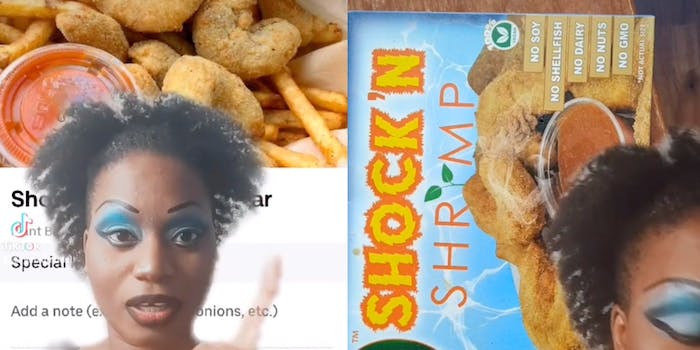 'No fries, no sauce, just frozen box and audacity.'

It’s a long-standing joke that the food you get from a restaurant is not going to look like the menu pictures. But for one TikToker, there was an extreme difference between what she ordered on Uber Eats and what she received.

TikToker @rainaltmodel shared a video, which has gained over 26,000 likes and 100,000 views, in which she shows what she ordered—a $19.99 vegan fried “shrimp” basket with fries and tartar sauce—and the box of frozen shrimp she received.

“When I say that it was frozen I mean it looked like it just came out of somebody’s deep freeze,” @rainaltmodel said.

The Shock’N Shrimp-Regular she had ordered from an undisclosed Chicago restaurant was just a box of frozen Shock’N Shrimp that she would have had to prepare herself. She emphasized that she did not order from a grocery store.

@rainaltmodel said she reported the incident to Uber Eats and got a refund. Viewers found the unfortunate order absurd.

“They said DIY,” one viewer joked.

“Wait so you didn’t even get FROZEN FRIES either?” one commenter wrote. “I could work with frozen shrimp but leaving out an ITEM um nah line drawn.”

The original poster replied, confirming that she did not receive the fries either.

“no fries, no sauce, just frozen box and audacity,” she said.

Commenters suggested that this might be a ghost kitchen—a restaurant which only operates on food delivery apps like Uber Eats, Grubhub, or Doordash.

These kitchens will use the apps to market and sell food without being open to the public with a dining area. Some businesses which have operated ghost kitchens on delivery apps include Chuck E. Cheese, Doghaus and even McDonald’s.

As for the box of frozen “shrimp,” @rainaltmodel posted a follow up video saying she ended up cooking and eating the food.

“It was good but not worth $20,” she said in her second video. “And not worth being catfished by a fucking restaurant.”