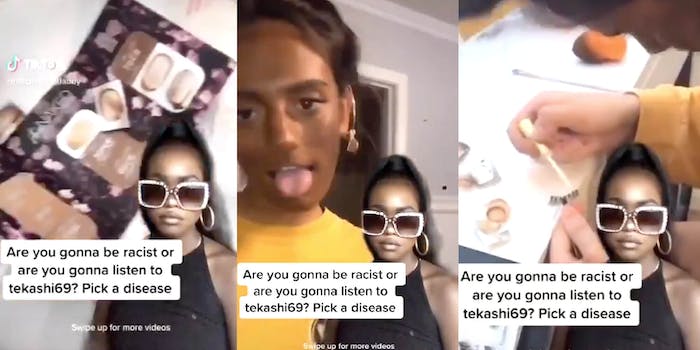 One of the teens released a statement to say she isn't 'racist or a fat shamer.' An investigation has been launched by the school district into the TikTok.

Two California high schoolers posted a TikTok video of themselves in blackface with a racist caption. On Monday, the Kern High School District announced it would be launching an investigation into the video, according to KGET.

In the video, the girls use Tekashi 6ix9ine’s new song “GOOBA” for their TikTok. They can be seen putting on blackface makeup in the video, captioned, “If we can switch genders, can we switch races?”

Being that the two girls featured in the video are minors, their identities have not been made public. One of the teens involved posted an apology online, saying, “I know what I did was horribly wrong and both [redacted] and I are deeply sorry. The video was a horrible joke that was not meant to hurt anyone, but I understand now how much it affects people.”

The teen goes on to write, “I am not a racist or a fat shamer. I love every one of every race and culture. I hope everyone that I hurt can forgive me for being so disrespectful.”

TikTok creator, @fatherco0n, who is known for speaking out against racist social media activity, reacted to the video with the caption, “Are you gonna be racist or are you gonna listen to Tekashi69? Pick a disease.”

As the video began making its way around Twitter, users began publicizing the girls’ names and calling for them to be reprimanded. One Twitter user wrote, “It doesn’t take a genius to realize right from wrong, they’re big girls let them take responsibility for their poor decisions!!”

A spokeswoman for the school district told KGET that while the investigation is underway, there is no new information at this time.