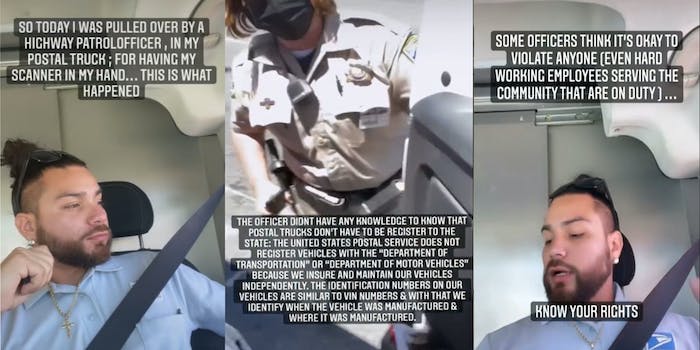 Federal mail trucks aren't required to register with the state.

On Thursday, postal worker and TikToker @HoodHealerAngel posted a now-viral video showing a police officer pulling him over. The user says he was pulled over because the officer misidentified a package scanner as a phone.

As the video continues, the officer says that she needs to open the door to the Postal Service truck to verify the VIN number. As she starts to do so, @HoodHealerAngel tells her that she is not allowed to open the truck.

“Don’t open my door. This is government property. You can’t touch this,” @HoodHealerAngel says in the video that has over 15,000 likes.

“OK,” the officer responds. It’s unclear if there is any policy prohibiting police officers from searching Postal Service vehicles.

As the conversation continues, @HoodHealerAngel says that the officer asked for the registration of the vehicle. Postal Service vehicles are not registered in any state but are inspected privately.

The video ends with the driver asking the officer to come back to “the office” with him; the officer says no.

In the comments, TikToker’s lamented police officers’ lack of training and knowledge about the Postal Service.

“How does this cop not even have common sense?” one user wrote.

“How are our police this badly trained?” another added. One TikToker called the officer a “Karen.” “No one is safe,” the user wrote.

@hoodhealerangel tells the officers that he has given them all of the information he had and that he was just trying to do his job.

The Postal Serice and the Gardena Police Department did not immediately respond to the Daily Dot’s request for comment.