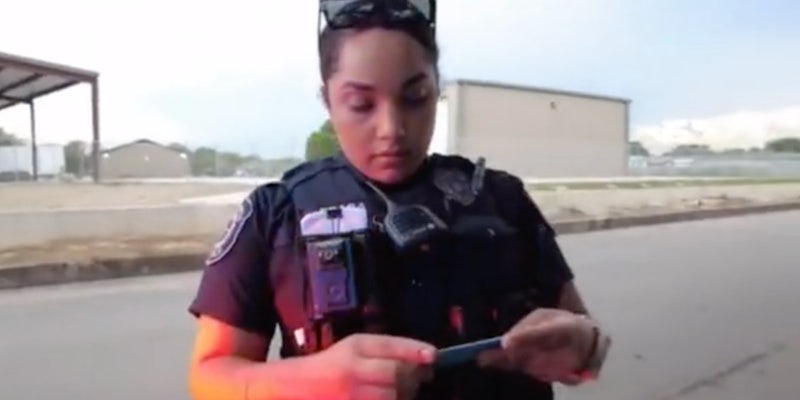 ‘Can you read?’: TikTok video shows officer berating driver for not having state license

'Do you understand English?'

A viral TikTok video shows a Texas officer falsely insisting that the driver must carry a Texas driver’s license to drive in Texas.

The video was posted by TikToker @notthisagainla earlier this month and by Monday had over 3.5 million views.

The video starts with the officer asking the man behind the camera if he’s recording her.

“You don’t have anything from Texas?” she asks.

“I don’t carry a license from Texas,” the man responds.

“So you’re driving without a license from Texas?” the officer says. “That’s another violation.”

According to Texas Department of Public Safety, a new Texas resident can use a valid, unexpired driver’s license from any other state as well as a few foreign countries whose licenses qualify for this privilege in the state for up to 90 days after they move to Texas.

“What violation?” the man asks in the video.

“Driving without a license,” the officer says.

“Can you read?” he asks her as she peers into his license.

“Do you understand English? Do you have anything provided from the state of Texas for you to be operating a motor vehicle?” the officer asks.

“Do you have one issued to you?” the officer responds before the video ends.

It’s unclear whether the driver was visiting Texas or was a new resident who had been there for longer than 90 days.

Users commenting on the video were appalled by the officers lack of knowledge and questioned her status as a police officer.

“Badges coming [straight] out of cereal box these days,” one person wrote.

“Bro who’s in charge of hiring these people,” wrote another.

TikTok temporarily blocked the user from receiving direct messages, citing “multiple Community Guidelines violation.” The Daily Dot reached out to the user in a comment.