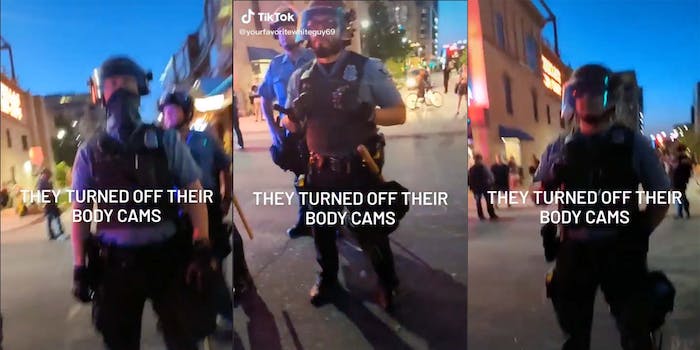 'They won't give us time to heal.'

“Fucking body cameras on? Where’s your badge?” says a voice in a viral video posted by TikTok user @YourFavoriteWhiteGuy.

The footage shows five Minneapolis police officers on duty at a police brutality protest following the death of Winston Boogie Smith, a Black man. People heard in the video say that the officers either “shut off” or covered up their body cameras.

The Minneapolis Police Department told the Daily Dot it would not comment on protesters’ allegations that officers turned off or covered their body cameras during the protest. The department said protesters can file complaints about officers suspected of violating policy to its Internal Affairs Unit or the independent Police Conduct Oversight Commission.

On June 3, a U.S. Marshal task force shot Smith in Minneapolis. According to a press release from the Minnesota Department of Public Safety Bureau of Criminal Apprehension (BCA), Smith was issued a “warrant for a felony firearms violation.”

The task force shot and killed Smith while attempting to arrest him. The press release states that Smith fired a weapon, which has been identified as a handgun by CNN, at the scene.

Sunday night’s protest took place at West Lake Street and Girard Avenue South in Minneapolis. The protests that followed Smith’s death on June 3 have resulted in over 27 arrests, according to CNN. John Elder, the Director of Public Information for the Minneapolis Police Department, said that officers used “non-lethal mechanisms” to break up protest crowds, according to KARE 11, a local news outlet in Minnesota.

“I usually record every time that I’m at a protest,” said Jamila, owner of @YourFavoriteWhiteGuy69, told the Daily Dot. “There has been a lot of suppression recently in regards to what’s happening in Minneapolis, especially in the case of Winston Smith.”

Jamila uploads videos of her experiences at protests on TikTok and Instagram to make sure that what happens at protests gets out to the wider public. She declined to share her last name with the Daily Dot.

Body cameras have been vital in many high-profile incidents of police brutality as they capture close-up footage.

DJ Hooker, an organizer for Twin Cities Coalition for Justice 4 Jamar who attended the protest, told the Daily Dot that several protesters overheard a police officer telling other officers that it was “OK if they turn their body cam footage off.” Jamila said that fellow protesters told her police officers had turned off their body cameras.

A friend of Hooker’s reached out to the Minneapolis Police Chief about the legality of officers turning off their body cameras. “They said that that was within their procedure because they didn’t think” that police would use force on any of the protesters, said Hooker.

“The later [the protest] went, we started seeing sheriffs show up,” Hooker said. “We started seeing giant cars, that are meant to be jamming stuff, unmarked vans, lots of white vans, a bunch of buses down the street.”

Hooker said those who attended the protest, which he called “very peaceful,” were worried that the police were setting up for a mass arrest. “It was fairly calm, in the sense that I wasn’t expecting to get attacked until it started to get dark,” Jamila told the Daily Dot.

Kidale Smith, the victim’s brother, is calling for more evidence and information surrounding his brother’s death. “I want bodycam footage,” Kidale Smith said, according to CNN. According to the press release from the BCA, “the U.S. Marshal Service currently does not allow the use of body cameras for officers serving on its North Star Fugitive Task Force.”

“A lot of people are trying to heal, trying to figure out what happened,” Hooker told the Daily Dot. “They won’t give us time to heal.”

Update 12:16pm CT, June 10: This article has been updated with comments from Jamila, the owner of TikTok account @YourFavoriteWhiteGuy.