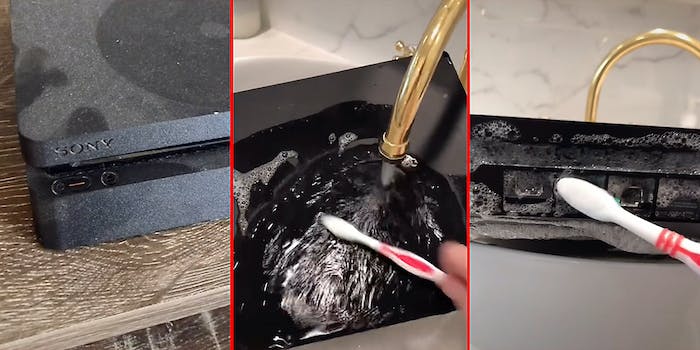 ‘This one is not a put-it-in-rice kinda job’: Video shows TikToker ‘cleaning’ PlayStation 4 with soap and water

A silly viral TikTok video shows a loving girlfriend claiming to “clean” her boyfriend’s PlayStation 4 console with soap and water.

Watched over 55 million times, the TikTok video posted by @not_erica_ has drawn more than 127,000 comments about the supposed washing of the video game console.

In the video, Erica takes a dusty PS4 from the living room into a bathroom sink, with the overlay text noting, “Suprised my boyfriend by cleaning his PS4.” She pulls out a toothbrush to scrub the hard-to-reach areas in between the buttons as Doja Cat’s “Get Into It (Yuh)” plays.

Erica dropped into the comments to write, “Omg someone help please it’s not turning on.”

One commenter asked, “My question is he still your boyfriend?”

Many took the “cleaning” seriously. One man wrote, “That joke is way [too] far. You’ve just took that mans enjoyment away from him.” Another said, “I beg you just buy him the ps5 cuz this one is not a put-it-in-rice kinda job.”

In a show of solidarity, one commenter wrote, “Put the controllers in a fire to sterilize xx such a good hack.”

Many others suggested his relationship status had changed, including gamer language in their comments, like “ACHIEVEMENT UNLOCK: you’re single.”

One commenter, unsure of what he just watched, asked, “This is a joke, right…Right?????”

The Daily Dot reached out to Erica for comment.