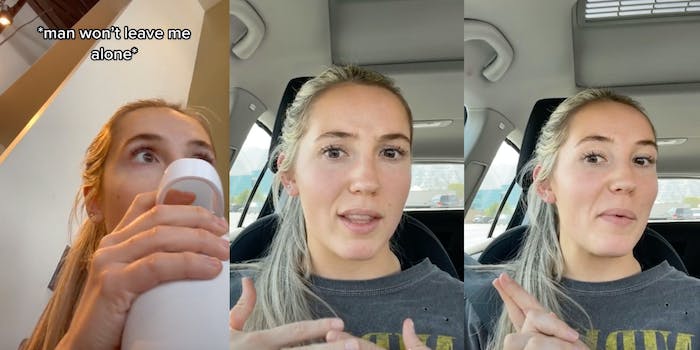 The barista quietly inquires if the TikToker is leaving the store 'because of him.'

A helping of mild harassment often comes part and parcel with many women leaving the home, a fact that TikTok has helped illuminate. Hundreds of videos on the platform see women recording their uncomfortable, irritating, or downright frightening encounters with men. A recent video, uploaded by @greenybeany420, provides viewers with yet another example of this far-too-common occurrence after a man at Starbucks stubbornly refused to take a woman’s hints.

@greenybeany420, who simply labels herself as Ave on TikTok, uploaded her video less than 24 hours ago. In the short time it’s been up, the video has rocketed to virality, with 1.2 million views, hundreds of comments, and more than 150,000 likes. It begins simply, with a camera angled up toward Ave’s face as a man talks inaudibly in the background.

Even in the first moments of the video, it is clear that Ave is uncomfortable. She gives the man brief, disinterested answers to his questions and seems to be avoiding eye contact. The situation is almost immediately helped by a Starbucks barista, who approaches and begins refilling Ave’s drink. She can be heard asking Ave if she is doing OK, to which Ave uneasily responds that she is “about to head out.”

The Starbucks barista, a pro through and through, quietly inquires if Ave is leaving “because of him” as she continues to hover protectively nearby. Ave confirms that the man is, in fact, the culprit behind her leaving, and the barista quickly apologizes before offering up a refill on Ave’s water bottle as an excuse to stay close. The video ends soon after, before switching to a shot of Ave sitting in her car post-incident.

She informed viewers, through her anxiety, that she was attempting to work at a Utah Starbucks location when the man approached and sat down. Ave said she did her best to display her lack of interest, noting that she was there to work. She said she name-dropped her husband a full six times and stressed that she was dealing with a time-sensitive task. She said that none of her efforts dissuaded the man, however, who continued to hover.

The Starbucks barista was on top of the situation “the second” the man made Ave uncomfortable, according to her story. She said the barista headed over to ask if Ave was interested in a refill, and when she leaned down to grab the empty cup, she whispered to Ave that the location had been having issues with the man. She reportedly asked that Ave let her know if the man was making her uncomfortable and assured her that she was keeping a protective eye on things from a distance.

The barista’s reaction blew Ave, and many commenters, completely away. Ave noted that she has felt harassed in many a coffee shop, but has never had someone step in to help. “It was just so comforting that she was there,” she said.

When Ave got up to leave the Starbucks location, she said the entire group of employees let her know that she could stay, as they were planning to remove the man. Apparently, “This isn’t the first time that he’s harassed a customer.”

Ultimately, Ave still decided to leave. She was feeling “panicky” and knew she would feel more comfortable in her car, so she headed out to complete her video and watch the conclusion of the interaction from a distance. It seems the Starbucks employees got the police involved, as Ave noted police arrived by the end of her video. She polished the whole story off with a “huge thank you” to the barista and her “great example” of how to assist a customer in need.

Commenters flocked to support Ave, many noting their own similar stories of harassment. Painfully, few anecdotes end with someone stepping in, a fact that many people pointed to as evidence of the Starbucks barista’s high quality. Numerous people, including Ave herself, called on Starbucks to “buy this team some lunch” or at least “recognize these employees.”

This is the internet, so there were some predictably contrary opinions. Several commenters asked Ave why she wasn’t more direct, and tried to blast her for trying “everything but literally telling the guy ‘you’re making me uncomfortable, please stop.'” Ave responded, in separate TikToks, to several of these commenters, noting that she is an anxious human who often struggles with confrontation. She didn’t need to defend herself, however, as numerous viewers flocked to do just that. They blasted negative commenters, in turn, noting that confrontation can often lead to “even more aggressive” behavior from some men. They also cut into the commenters for attempting to “victim blame” and noted that it is not Ave’s responsibility to stop men from harassing her.

Thankfully, Ave made it away from the situation safe and sound. And the Starbucks location got a good bit of attention, as Utah TikTokers promised to make a stop at the store to “show this phenomenal team some lovin’.”

The Daily Dot reached out to Ave.