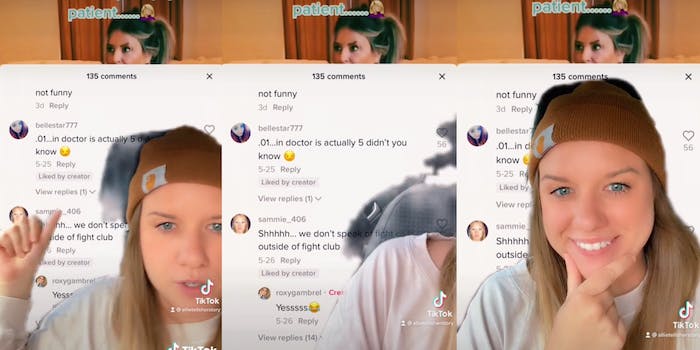 Her video is the latest to criticize nurses posting about unethical practices.

A TikTok creator is bringing attention to the practice of “nursing doses,” sparking discussion about the ethics of giving a patient more medicine than prescribed.

Creator @allietellsherstory shared a video critiquing comments and “jokes” made by other users claiming to be nurses, asking for someone to explain why it was funny.

“It’s all over unethical nurse TikTok, I’m confused,” she said in the video. “I keep seeing this thing how it’s a joke… if someone could explain this to me I’d be super grateful. Because there’s no way it’s a joke if this many people are doing it, right? What’s a nursing dose?” Her video has over 150,000 views.

“Nursing doses” are reportedly an administration of additional medication by a nurse that has not been prescribed by a doctor in a healthcare facility.

The idea is that the additional medication can help to soothe the patient or make them less “difficult,” but the real impact of the practice may do more harm than good, according to the Advanced Emergency Nursing Journal. It’s typically done inconspicuously. A physician who prescribes a certain dose of medication may fall under the impression that the dose they prescribed is sufficient—unaware that more medicine was used to produce the desired result. The higher dose given to the patient could cause them more physical harm.

A user who claimed to be an ex-caretaker elaborated on the consequences of using a “nursing dose.”

“Misdosing is not just a fireable offense, it’s a violation of rights and it’s a criminal act,” @KaptainShiney wrote. “Incredibly illegal.”

Another user pointed out that there is a difference between accidentally giving an incorrect dose and doing so on purpose, which might result in a less harsh punishment. However, @KaptainShiney pointed out that the comments referenced by the original poster admitted to the deed on TikTok, showing “knowledge and intent.”

“If any of their patients are proven over dosage this can be proof and used against them in court,” they wrote. “I’d actually consider sending this to where they work so the hospital can check and monitor their patients.”

On her Instagram account of the same name, @allietellsherstory has shared multiple videos of nurses claiming to use unauthorized doses of medication to rein in patients.

One of these videos is from a TikTok creator who has since been suspended from her job for her videos, in which she joked about giving patients extra doses of medication.

The suspended nurse, Kelly Morris, with her pink and blue hair, also joked about unplugging ventilators to charge her phone during a viral pandemic in which a respiratory disease has killed 600,000 Americans since March 2020.

All but one of Morris’s videos have been deleted from her TikTok account, with the sole remaining video claiming that the whole thing was a joke.

@allietellsherstory’s video is the latest to expose healthcare workers openly posting about unethical practices online, and Morris is just one of these workers who has appeared to face consequences for it. The Daily Dot previously reported that another TikTok creator got a male nurse allegedly fired for sharing discriminatory opinions and spreading COVID-19 misinformation while wearing his uniform.

The Daily Dot has reached out to @allietellsherstory for comment.