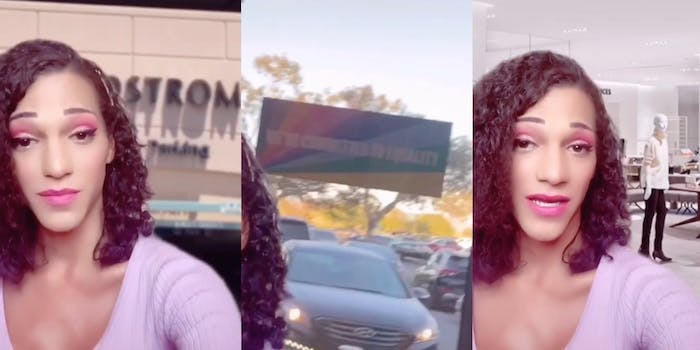 ‘She wanted nothing to do with me’: TikToker alleges Nordstrom employee denied her service for being trans

A TikToker is accusing Nordstrom of discrimination after an encounter she had with an employee in one of their California stores.

Licca, a Black transgender woman who goes by @liccalollipop on TikTok, shared her story with her followers after feeling like the response she received from the department store was inadequate.

“As a transgender woman of color, I build myself up before I go out anywhere, because I know I’m going to face discrimination,” she said, noting that is exactly what she did prior to walking into Nordstrom.

But the rainbow flag sign on the door claiming that they are “committed to equality” helped calm Licca’s nerves and she continued upstairs where she planned to exchange an item that she previously bought.

However, when she asked a sales associate for help, she says, they were initially reluctant to address her at all, and then simply pointed to an “empty department” nearby and told her someone else would help her.

Licca said she searched for another employee in that department, but found no one, and returned to the original sales associate. But further attempts to get her to help led nowhere.

“Her demeanor towards me was so rude,” Licca recalled. “She made it clear she wanted nothing to do with me.”

She ultimately found someone else to help her with her exchange, but says that while she was doing so, she looked over and saw the original associate helping “an affluent white woman…with a smile, like she’s got all the time in the world.”

Licca says she emailed Nordstrom to complain about the situation and ask what they planned to do in order to show better support for the LGBTQ community, but all they initially said was that they “may move [the associate] to another department where she wouldn’t deal with customers.”

“Now, is that really a solution?” she asked. “I walked out of Nordstrom feeling so absolutely devastated because she turned me away like I was nothing. That’s the last thing I want to feel. I deserve to be treated just like that other customer.”

Licca’s TikTok has gathered over 150,000 views, with many commenters tagging Nordstrom and demanding further accountability.

“THIS IS UNACCEPTABLE!” one person wrote, tagging Nordstrom in the comment. “Please do something about this transphobic employee!”

“Completely BS on their part,” another viewer wrote. “I want accountability for you. Daring to put ‘we’re committed to equality’ & keeping their discriminatory employees.”

The brand ultimately commented on her video that “the behavior described is unacceptable & we have no tolerance for discrimination of any kind,” but Licca wasn’t satisfied with “just words,” and wants Nordstrom to commit to educating employees on “diversity and equality.”

“This wasn’t just a ‘misunderstanding’,” she said in a follow-up video showing an email from Nordstrom describing it as such. “This was traumatizing for me. For a transgender person, something so little as even just walking up to an employee or shopping is a huge deal. These little things add up and so when you post a rainbow flag on your front door and you expect us to believe that we’re going to be treated with respect in your store, and we’re not, that’s an issue.”

Update 12:21pm CT, June 21: In a statement to the Daily Dot, Licca said that the “harsh blow” of the experience has stuck with her.

“I am especially hurt that they called this incident a ‘misunderstanding’ because that means they are refusing to acknowledge my equality,” she wrote. “That means the next transgender person will have to cope with the same mistreatment and pain as I did.”

Update 5:27pm CT June 21: In a statement to the Daily Dot, a representative for Nordstrom again called Licca’s experience a “misunderstanding” and wrote:

“We are committed to creating a welcoming and respectful environment for all of our customers and do not tolerate discrimination of any kind. We have addressed the misunderstanding with the employee and have used this experience as an opportunity to coach all our employees so they can consistently offer good service.”

For her part, Licca expressed dissatisfaction with the company’s characterization of the incident as simply a “misunderstanding.” She said that she has not heard any updates about Nordstrom moving the employee or further redressing the situation.