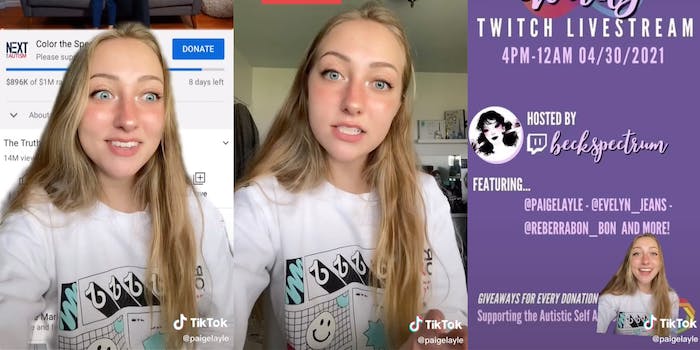 'We deserve to call the shots on our own disorder.'

A group of autistic TikTok stars is organizing a live stream to counter a celebrity-endorsed fundraiser for an autism awareness organization that the TikTokers say is actually anti-autistic people.

Paige Layle, who has more than 2 million followers on TikTok, posted a video on Thursday with a reference to a video by YouTuber Mark Robero about his son’s autism.

In the 10-minute video, Rober shares the story of his son, who he says is “on the autistic spectrum.” He also shows his son’s friend who can tell the day of a random date on the calendar, a trait that many autistic people have.

The organization Next for Autism shared a link to Rober’s video in a post earlier this month, announcing that it’s collaborating with him and celebrities including Jimmy Kimmel and Stephen Colbert, for a fundraising event called “Color the Spectrum.”

According to the information on Rober’s YouTube page, Next for Autism has raised more than $949,000 through this fundraiser.

But autistic TikTokers like Layle are sharing videos saying that the campaign is, in fact, harmful to autistic people.

In her video, Layle said that Next for Autism supports “autism hate groups” including Autism Speaks and Cure Autism. She pointed out the organization’s history of anti-autistic mission and commentary, much of which has been documented by autistic people and parents of autistic people.

In her video, Layle claims that the organization aims to “cure” autism or prevent the birth of autistic children.

Author Emily Willingham, the mother of a child with autism, blasted Autism Speaks’ “vilification” of autism in a 2013 Forbes article, claiming that it leads to a dehumanization of autistic people.

“I can’t begin to say how offensive it is that someone would distort our lives with our wonderful children as not even living, as nothing but ‘despair’ just to buy attention from people who don’t know any more about autism or autistic people beyond that blue puzzle piece,” she wrote.

Social media stars are upset that an organization they don’t trust has raised almost a million dollars in the name of helping them.

“We are sick of neurotypicals talking over us,” Layle said in the video. “We deserve to call the shots on our own disorder.”

She said around the same time that Next for Autism’s event will take place, social media users with autism will be hosting a Twitch live stream.

According to a poster shared on social media, speakers for the April 30 live stream will include Layle, Evelyn Jeans, TikToker Tim Boykin (@blackautisticking), and TikToker Rebecca Faith Quinn (@reberrabon_bon). Jeans did not immediately respond to the Daily Dot’s questions.

Meanwhile, a Change.org petition by Chloé Hayden demanded that the “eugenics fundraiser” be halted.

“Awareness and understanding towards autism is brilliant. Organizations that support the ending of us is not,” part of the petition states. “Millions of dollars will be raised during this campaign- all of those involved undoubtedly assuming it’s going into the right hands, so it’s time to make sure it does.”

Some used the opportunity to call out the organization on social media.

“I want to highlight the alternative to support actually-autistic lead events and organisations … Listen to autistic voices. Nothing about us without us,” wrote one user on Next for Autism’s Facebook post.

“Yeahhhhh how about NO. #ActuallyAutistic people like me are fucking pissed off about this. We’re not a fucking cancer. We’re not something to be ‘cured’ or ‘prevented,’” another user wrote.

The Facebook event that Layle shared via screenshot was not publicly available when the Daily Dot searched on Monday.

According to the Next for Autism website, the guests for its event also include Jon Stewart, Conan O’Brien, Chris Rock, Adam Sandler, John Oliver, and Andy Samberg.

According to comments on Layle’s TikTok, performers Rhett & Link, Miranda Sings, and Karl Jacobs dropped out of Next for Autism’s event. The Daily Dot was not able to independently verify this.

The Daily Dot has reached out to Next for Autism and publicists for Kimmel, Stewart, Sandler, Colbert, and Oliver, and will update the report if they respond.