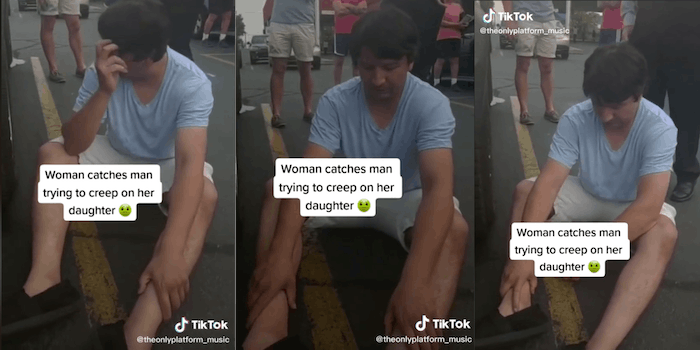 ‘Not today, buddy’: Video shows mom chasing down dude for creeping on her 12-year-old daughter

A viral TikTok shows an irate mom accusing a man of spying on her daughter in a changing room and chasing him down before police arrive.

The clip, which first went viral in 2018 and at the time received 4 million views on Facebook, is recirculating on TikTok and getting mixed reactions from viewers.

The video was taken by Salt Lake City mother Doris Stiles-Scrown. The woman says a man sitting on the ground was spying on her 12-year-old daughter in a changing room at a nearby Rue21 store. She chased the man down and videotaped him while waiting for authorities to arrive.

Witnesses said the man, Jorge Leon-Alfaro, was trying to record the girl changing, and when caught, he attempted to flee.

“Not today, buddy. Not today,” the mom says while filming. “I’m going to make sure your face gets out, so that you’re not in any more stalls, looking under little girls dressing.”

Salt Lake City police arrested the man and charged him with ​​felony voyeurism of a child under 14, according to KSTU.

“People are aware of what’s going on and paying attention,” Detective Greg Wilking of the Salt Lake City Police Department told the news outlet. “Other people were paying attention, too, and saw similar things that concerned them and that led to his arrest.”

At the time, Leon-Alfaro also faced a misdemeanor charge of sexual battery for inappropriately touching a woman as she walked past him in the parking lot of an amphitheater, KSL-TV reported.

The man appeared in front of a judge in August 2018, when it was revealed that he was an undocumented immigrant, according to KTVX. He was placed on an immigration hold and detained at a Salt Lake County jail.

A year later, Stiles-Scrown started a petition on Change.org calling for the government to sentence Leon-Alfaro to jail time in the U.S. instead of extraditing him to Mexico, where he is a citizen.

“As you all remember last year I caught Jorge Leon Alfaro laying on the floor peeping under my daughters dressing room stall trying to take photos and grab or feel up her leg,” the petition states. “It was a good thing other victims [were] able to come forward and they recovered images of hundreds of other unknowing victims on his [phone] which he deleted during the chase … I am asking you sign this in hopes that the judge will see that it is not right to just send him off to not be burdened with his crimes here it is not ok to free him to the innocent children of his country.”

More than 600 people have signed the petition; the initial goal was 1,000 signatures.

The TikTok video was posted Thursday by @theonlyplatform_music and by the afternoon had 1.6 million views and 272,700 comments.

Some people are asking for proof that the man was spying on the girl,and taking the situation lightly.

“Free him he ain’t do nothing,” wrote @chickennuggeteater6.

Others are horrified at the situation—and even more so at the lack of sympathy in the comments.

“A Lot of y’all are actually SICK. He literally was watching a little girl CHANGE. It’s not a joke for y’all to be laughing at,” wrote @crystalranee1.

“I’m a dad I would get myself arrested good job mom for not stopping [AMEN],” @joshuaebersole1 said.

The Daily Dot reached out to the Salt Lake City Police Department for an update on the case.