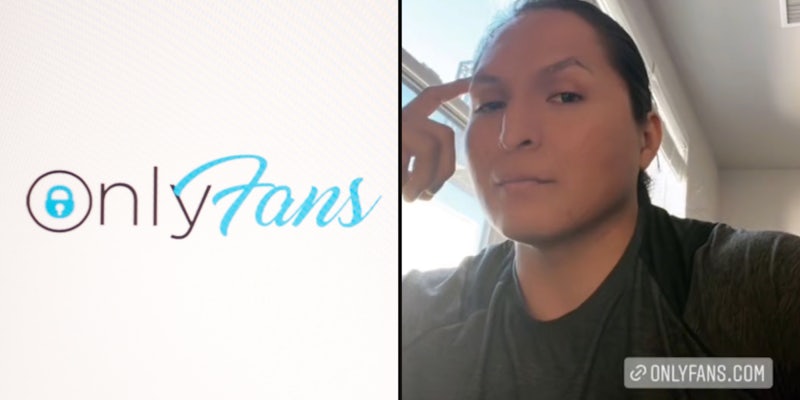 'Was not expecting this plot twist.'

Some social media users say the account is the latest in a series of developments regarding a relationship Tsosie allegedly had with two other TikTokers.

Tsosie is a Navajo TikToker known for using the phrase “hey colonizer,” when referring to white supremacists and racists. Tsosie responds and reacts to videos from those who post prejudiced videos on TikTok.

The TikToker has about 2.6 million followers, but his account (@modern_warrior__) has been made private since the accusations.

In Hart’s TikTok, they say that Tsosie and they were “romantically involved” and Hart understood that they were physically and mutually exclusive. With that understanding, the two had unprotected sex, but Hart found out the next day that Tsosie was on a date with another person.

In Marie’s TikTok video, she said her story was “identical” to Hart’s.

Hart said in their TikTok video that Tsosie “felt entitled” to their body because they trusted him, but they violated that trust. Marie said Tsosie “denied [her] informed consent.”

Following the accusations, some said the attempt to hold a large creator accountable for his actions became an attempt to “destroy an Indigenous man” that has brought Indigenous women down in the process.

Nearly a month later, some are trying to connect Tsosie’s new OnlyFans with the previous accusations. In his OnlyFans account bio, Tsosie called the account his “D-colonizing page.”

According to one TikToker unrelated to the sexual accusations, Tsosie debuted the OnlyFans account on his Instagram story. The TikToker, known as Romanos (@.anativeguy), shared an alleged screenshot of Tsosie’s Instagram story where he said, “So. I did a thing. Check the link.”

The Daily Dot could not verify the screenshot shared by Romanos, but at the time of publication, Tsosie shared another Instagram story encouraging followers to check the link in his Instagram bio.