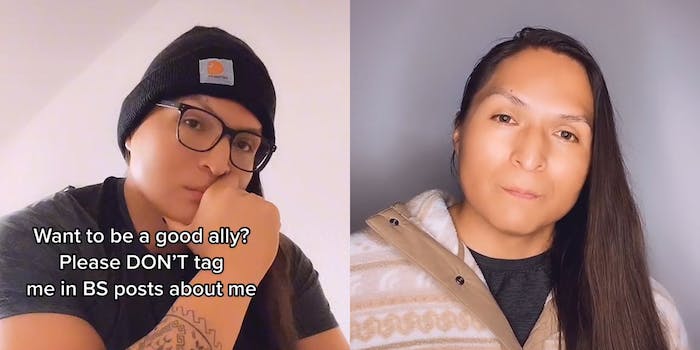 ‘I did not consent to unprotected sex with multiple partners’: TikTokers speak out against popular user Modern Warrior

Two TikTokers say Lance Tsosie lied to them about having multiple partners before having unprotected sex with them.

Tsosie is Navajo TikToker who coined the phrase “hey colonizer,” which Tsosie uses to refer to white supremacists and racists. Tsosie responds and reacts to videos from those who post prejudiced videos on TikTok. He also uses his platform to inform his 3 million followers about his Native American upbringing, community, and the issues that indigenous people and groups are facing.

On Wednesday, Hart and Marie both posted TikToks explaining their separate relationships with Tsosie, which, unbeknownst to both of them, seem to have occurred simultaneously.

In Hart’s TikTok, they say that they and Tsosie were “romantically involved” for the past six months and had a strong friendship before then. Under the understanding that they were physically and romantically exclusive, Hart says they visited Tsosie and had unprotected sex with him. A day after, they say they found out he was on a date with another person.

“You felt entitled to my body because I trusted you,” Hart says in the TikTok, which has been viewed over 2.2 million times. “You violated my trust. I almost want an STD test.” They also say that they don’t want viewers to cancel Tsosie or “ruin his life,” because they thinks the TikToker can “genuinely do better.”

In a follow-up TikTok, Hart says that they do not know if Tsosie’s actions count as assault and that they don’t want to make that accusation without knowing for sure.

Hart also posted a clip of a video Tsosie posted apologizing to them, which Tsosie has now deleted. In it, he says that he is sorry that his friendship with Hart has “come to this” and for “not being the effective communicator that [he] wanted to be.” Hart clarifies that they want Tsosie to apologize for “taking advantage of [their] vulnerability to get in [their] pants.”

Marie’s TikTok begins with her saying that if viewers had seen Hart’s video, then they know Marie’s story because their stories are “identical.” She says that she also had unprotected sex with Tsosie after he told her he hadn’t had unprotected sex with anyone else and that Tsosie “denied [her] informed consent.” Informed consent is when someone has all the available information about a choice they’re going to make before they make their decision.

“It’s really fucked up,” Marie says in the TikTok, which has been viewed over 500,000 times. “He is a liar. He is a manipulator.” Marie also says that Tsosie preyed on her and Hart.

Marie also says in a TikTok she had a pregnancy scare after having unprotected sex with Tsosie and got an STD test. She also clarifies that she doesn’t want viewers to “attack” Tsosie.

“I think he definitely was banking on his platform on here to keep me quiet and to keep Chelsea quiet in the event that we ever found out (about each other and the others Tsosie was involved with),” Marie says in another TikTok.

Hart has 1.7 million followers, and Marie has over 300,000 followers. Both Hart and Marie’s videos sparked discussions in the TikTokers’ various comment sections about what informed consent is, why it’s important, and the concept of sex by deception (see, also, rape by deception), which is loosely defined as lying about something in order to have sex with someone.

Sex by deception is reportedly difficult to prosecute because the matters about which a victim is being deceived about vary: Examples cited by the New York Times include one’s age, one’s job, and even saying “I love you” in order to get someone to have sex with you.

“No one should be tricked, deceived, coerced, violently overwhelmed, drugged or intoxicated into sexual conduct,” consent activist and head of of ConsentAwareness.com Joyce Short told the Times. “Everyone has the right to determine who they engage with sexually based on both knowledge of the action and clear and informed knowledge of the actor.”

The Daily Dot has reached out to both Hart and Marie via email and to Tsosie via Instagram direct message.