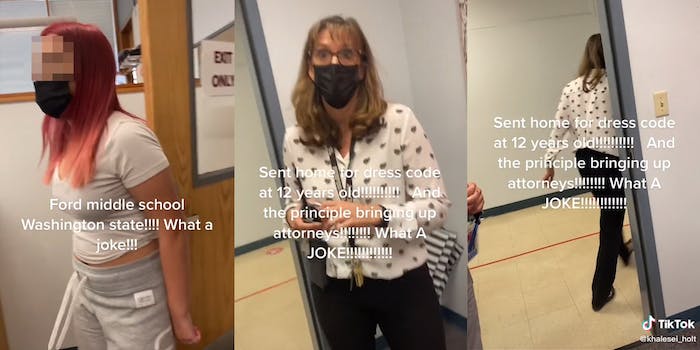 ‘So you’re taking her education away over her dress code?’: Mother sticks up for teen daughter, sparking dress code debate

The principal mentions attorneys in the viral TikTok.

The TikTok was posted to the platform by @khalesei_holt, and it’s garnered more than 7.2 million views since going up Friday. It documents a conversation that the mother of three girls (according to her TikTok bio) has with the principal of Ford Middle School in Tacoma. The on-screen caption declares that the TikToker’s daughter was sent home for a dress code violation “at 12 years” (with multiple exclamation points following) and then further trumpets, “And the principle (sic) bringing up attorneys!!!!!!!! What a JOKE!!!!!!!!!!!!”

Indeed, the video starts with the TikToker saying, “So I am done with it” and asserting her right to record their conversation. However, the principal tells the TikToker that she doesn’t have permission to record and mentions attorneys. The TikToker asserts that she is recording their exchange for her “protection.”

The daughter, wearing a T-shirt and what appeared to be yoga pants, is briefly visible in the video, as the TikToker is asserting, “But she’s still going to go to class.” It is unclear if the outfit the student is wearing in the video is what got her a dress code violation.

She then asserts that her daughter is going to go to class despite the principal’s decision. The student handbook published online has a detailed dress code that includes “student changes/covers clothes and calls
home” as a first step.

Some who jumped into the TikTok conversation saw the principal enforcing the dress code within her right.

“Really? Mom doesn’t like the school dress code?” one person responded. “Homeschooling is the solution and she can wear whatever she wants … stop whining, parents!”

Another opined, “Is the dress code not sent out to parents at the beginning of the school year?”

Yet another criticized the TikToker’s parenting, observing, “Great parenting. Teaching her that rules don’t apply.”

But others railed against the tyranny of dress codes, with one person noting, “If a teacher is distracted by a student’s body or clothing, they aren’t cut out to be a teacher, period.”

A subsequent TikTok from @khalesei_holt led to a debate about whether what she was wearing constituted a crop top, and whether it exposed her midriff.

And another follow-up video shows police on the scene, though there is not much context. An apparent official tells the mother that her daughter has to go home for the day, even if she changes clothes.

The Daily Dot has reached out to the TikToker and to the school’s principal for comment.