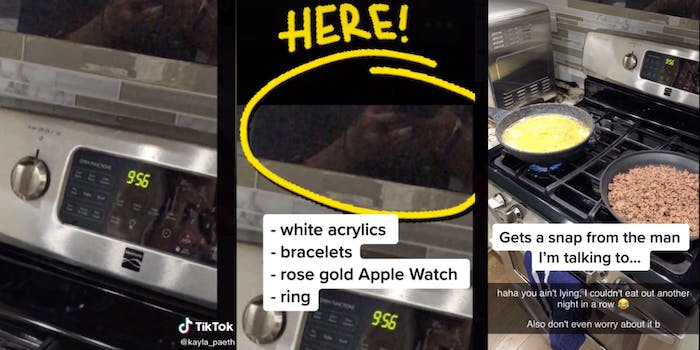 This woman can now add “detective” to her resume.

TikToker @kayla_paeth discovered a man she was dating was hanging out with another girl when she saw the girl’s reflection in a Snapchat photo the man sent her.

We can’t all be as savvy, but Paeth showed us her inspection process in a TikTok posted yesterday that now has 896,500 views and 84,700 likes.

The video shows a screenshot of the Snapchat which is a photo of food (spaghetti and ground beef) cooking on a stovetop. The man wrote in the overlay: “haha you ain’t lying. I couldn’t eat out another night in a row 😂. Also don’t even worry about it b.”

The TikTok then zooms in on a reflection that can be seen in a shiny part of the metal stove near the digital clock. Here, Paeth pauses, circles a section of the image that appears to show a female holding a phone wearing acrylic nails, and writes: “white acrylics, bracelets, rose gold Apple Watch, ring,” to list the signs that it is indeed another woman.

The TikTok is set to audio of Wendy Williams saying, “Wait, what was that?”

Many are praising the woman’s investigative skills.

“HE [doesn’t] have enough burners on that stove. You dodged a bullet,” commented @magicmarie333.

“[We’re] literally better than the FBI I swearrrrrrr. I hope youre ok!” said @_asianista.

“Im always afraid ill get caught like this so i inspect all my pictures carefully,” wrote @junir001.

Others offered different explanations for the woman’s reflection.

“Maybe sister or friend!” agreed @camasteal, but Paeth was quick to shut this theory down.

“He and his sister are African American so I could tell it wasn’t her lol & when I asked who it was he responded ‘should’ve been you’ 💀,” she replied.

The Daily Dot reached out to Paeth for comment.