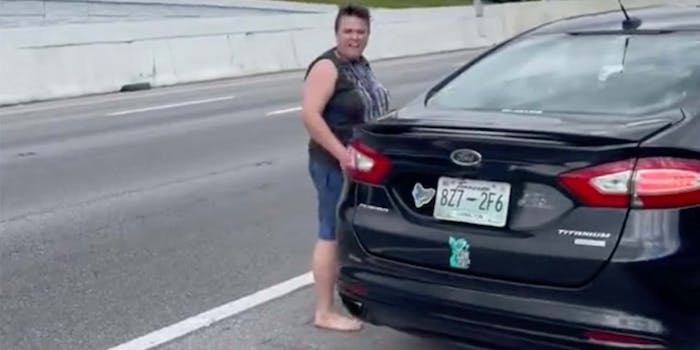 ‘That was a scary moment’: TikToker films Lyft driver refusing to roll up the windows on highway, trying to grab their phone

In a TikTok posted on Tuesday, a Lyft driver grabs at a TikToker’s phone, pulls her car over on the side of the highway, and demands he get out of the car.

“I’m not going anywhere until you open that trunk,” says @aaron0383, whose suitcase is still in the woman’s car. WTVF, a local news outlet in Nashville, identified the TikToker as Aaron Swetland.

The Lyft driver exits the car, barefoot, and throws Swetland’s suitcase toward him on the road.

“Fuck you and fuck your mama, too,” the Lyft driver says to the camera.

Swetland captioned the TikTok “when the Lyft driver doesn’t want to roll up the windows while driving 80,” which WTVF reported was the inception of the altercation between the two.

According to WTVF, Swetland’s driver had locked the windows in the car to ensure they remained open. When he asked her to slow down, she turned around and saw him recording her. That’s when the video begins.

“When she tried to grab for my phone and throw it out of the vehicle that was a scary moment,” Swetland told WTVF. “Because I’m like—had she succeeded, I lost my only way to communicate.”

Swetland told WTVF that “this really can happen to anybody,” so anyone using ride-hailing apps should remain cautious and aware of their surroundings.

Lyft’s official TikTok account commented on Swetland’s original video, saying that the platform has suspended the driver shown in the video.

In a statement to WTVF, Lyft also said the company will initiate a “full investigation” of the incident.

Commenters applauded how Swetland responded to the situation. “The way you handled it, we could totally be friends and grab a beer,” wrote @joeyloescher.