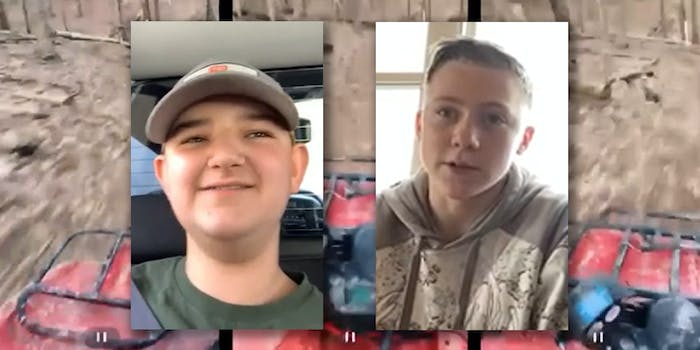 A 13-year-old watching a 12-year-old’s live stream on TikTok saved his life recently when video footage took a deadly turn.

Caden Cotnoir of Gilmanton, New Hampshire likes hunting, fishing, and four-wheeling, according to WFMZ. That’s why he was watching West Virginia boy and TikTok creator Trent Jarrett ride his ATV on-stream. Suddenly, Jarrett’s vehicle flipped and he was trapped under it—well outside of earshot from his family.

“His phone goes blank,” Cotnoir told WMUR-TV. “You can just hear him yelling and kind of just yelling for help.”

Trapped, Jarrett realized the only phone number he knew by memory was his grandparents’. So, he repeated it for his TikTok audience.

“He’s scared that he’s not gonna make it out,” Cotnoir said. Cotnoir pounced on the situation and told his dad, who called Jarrett’s family. Twenty minutes later, the West Virginia boy was found and rescued by his parents.

“He did what he was supposed to do and got the right people,” Cotnoir’s stepfather, Matt Currier, told WMUR-TV. “It was an Easter miracle.”

“I couldn’t hardly breathe,” Jarrett added, speaking to via Zoom.

The boys have never met, but now plan to.

“My only reward is that he’s fine,” Cotnoir said. “If something ever goes wrong [again], I’ll most likely be there [watching on-stream]… Hopefully we get to meet one day.”