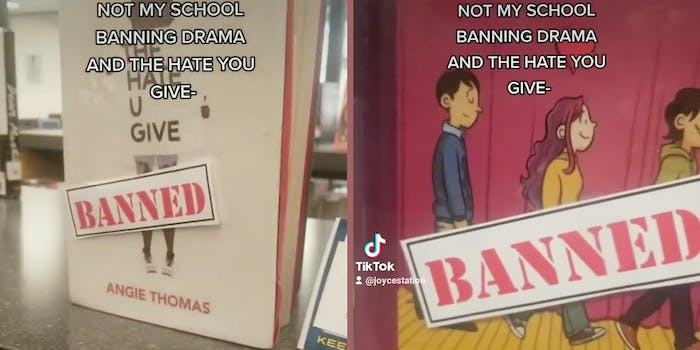 ‘Homophobic and racist’: Sign about bans of LGBTQ and ‘anti-cop’ books sparks anger on TikTok

The controversial novels were highlighted during Banned Books Week.

A TikToker called their school “homophobic and racist” and accused the library of banning books with LGBTQ and “anti-cop” themes. It turns out that the library was highlighting the books and wasn’t actually preventing students from reading them—but the video still sparked a discussion among TikTokers.

Posted by user @joycestation, the clip shows a school library display of Drama by Raina Telgemeier, a graphic novel about a middle school play with LGBTQ characters, and The Hate U Give by Angie Thomas, about a Black teen who witnessed a fatal police shooting. The books have “BANNED” labels across their covers, and small signs next to the books explain why they have been banned from some reading lists.

Both books have been spotlighted by Banned Books Week, which is described on its website as “a coalition of organizations dedicated to free expression” and provides materials to educators about teaching censorship of books.

According to the signs, Drama was “banned and challenged for including LGBTQIA+ characters and themes,” and The Hate U Give was banned “because it was deemed ‘anti-cop,’ and for profanity, drug use, and sexual references.”

Many commenters were outraged when they thought the books were “banned,” but one user explained that the display was “raising awareness for dumb reasons why books were banned by the government.” Both books have been banned in schools across the country, according to Banned Books Week.

Even though those specific books were not banned by the TikToker’s school, the user said there are still regulations on what students are allowed to read.

“Last week a girl got her book taken away by my english teacher because it was about native americans,” user @joycestation said in the comments of a previous upload of the same video.

The TikToker also said that other than the campaign for Drama, the school “isnt too fond of the lgbtq” and doesn’t have an LGBTQ section in its library.

The Daily Dot reached out to user @joycestation via TikTok message. They did not immediately respond to the request for comment.