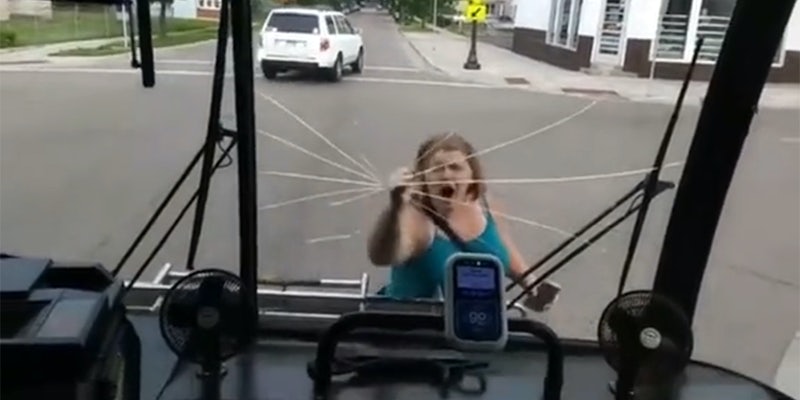 ‘Is that window made from iPhone screen?’

In a TikTok posted on Sunday by meme aggregation account @memeswithdaboyz, a woman dubbed a “Karen” stands in front of a bus and punches its front window, causing it to crack. “Get off the bus!” the woman screams.

“You can go ma’am,” another person yells.

The woman then begins to run across the street in front of bus until she’s out of frame.

The overlay text on the video says that the woman hit the bus after she missed its departure. Commenters on the video had mixed reactions; some expressed disbelief.

“Karen really expect them to let her in after what she did,” user @jellyfishing0 wrote.

“She really [thinks] he’s gonna let her on the bus?” @lostorangecat24 said.

Others said they pitied the woman because she might have been late to something important, but fellow commenters disagreed.

“Her first instinct was to act with violence,” wrote @eleiaaaaaa. “I don’t care if she’s running late—it does not excuse her ridiculous attitude.”

Commenters could agree on one thing, though: The bus window seemed pretty flimsy.

“Is that window made from iPhone screen?” joked @slcme.

The TikToker to posted the video, @memeswithdaboyz, did not immediately respond to the Daily Dot’s request for comment via Instagram direct message.