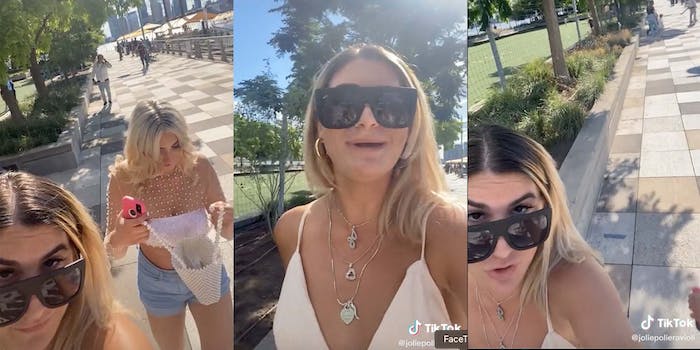 He called the TikToker and her friends 'disgusting names.'

A viral TikTok shows a woman using a clever song to shut down a known fraudster who called her a transphobic slur. “This bozo got mad and called me a tra*ny so clearly I had to put him in his place,” Jolie Palazzolo says in the video’s caption.

“When you’re 5-foot-2, and you get mad at sexy bitches,” begins Palazzolo’s tune that has now been made into a TikTok sound called “when ur 5 foot 2.”

The man shown in Palazzolo’s video has been identified as Giovanni Luciano, also known as The Bungalow Bungler, who corresponded with the Observer during his time behind bars in 2008 for grand larceny. As reported by the Observer, Luciano had “been passing himself off around town as an heir to Dolce & Gabbana,” and he told Palazzolo the same tale.

According to Palazzolo in a later TikTok, she and a group of friends were on a boat on the Hudson River in New York City when Luciano told them he was “TikTok famous.” Palazzolo and her friends asked to see his account, he refused, and they called him a fraud.

“He got so upset,” and called her and her friends “disgusting names,” says Palazzolo, who is cisgender. Later, when the women were getting into an Uber, Palazzolo claims Luciano said, “You’re not girls, you’re men,” and used a transphobic slur.

Palazzolo also says that Luciano has been in contact with her via Instagram direct message, congratulating her on her newfound TikTok fame.

When contacted by the Daily Dot, Luciano said he was going to release a statement on the videos. “The whole truth will come out,” he said.

The Daily Dot reached out to Palazzolo.

Correction: This story has been updated to reflect that Jolie Palazzolo is a cisgender woman.