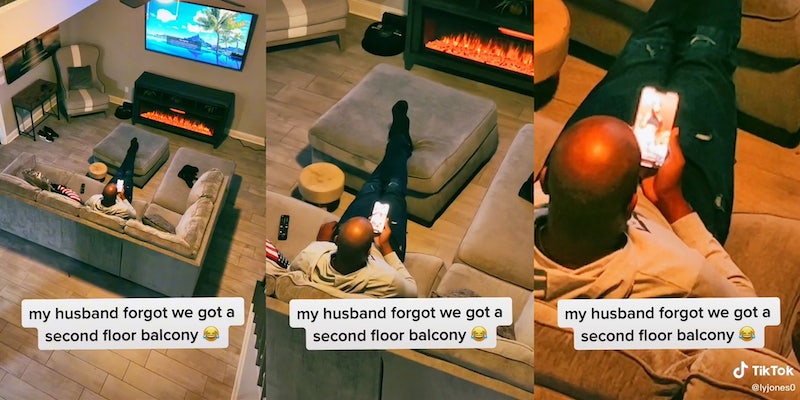 ‘My husband forgot we got a second-floor balcony’: TikToker records husband while he scrolls through images of women, sparking debate

TikToker @lyjones sparked discussion about whether looking at other people via social media while in a relationship is inappropriate or not. The user posted a now-viral video on Jan. 11 showing her husband sitting on the couch and scrolling through photos of other women on his smartphone.

“My husband forgot we got a second-floor balcony,” the TikToker wrote. She recorded the video from the second floor.

The video received more than 1.6 million views by Friday. The comment section was filled with divisive opinions from both men and women.

One user made a comment that prompted the TikTok creator to post a response video. “Leave him alone… you do NOT own him,” the viewer wrote.

In the follow-up video, @lyjones wrote, “According to the city of Tallahassee, she does own him. A lot of people say that marriage is just a piece of paper. No, it’s ownership. You know, something happens to him, it’s mine. Something happens to me, it’s his. And when you go buy a dog, what do you need? Papers. Just for you to have ownership—it belongs to you.”

Others, however, had a different stance on the severity of the husband’s actions.

“Am I the only one not bothered by this? I look at thirst traps on TT [TikTok] all day long, doesn’t mean I’ll cheat,” another said. Thirst traps are sexy photos, usually posted to gain a reaction out of followers.

The Daily Dot reached out to @lyjones via direct message on TikTok.