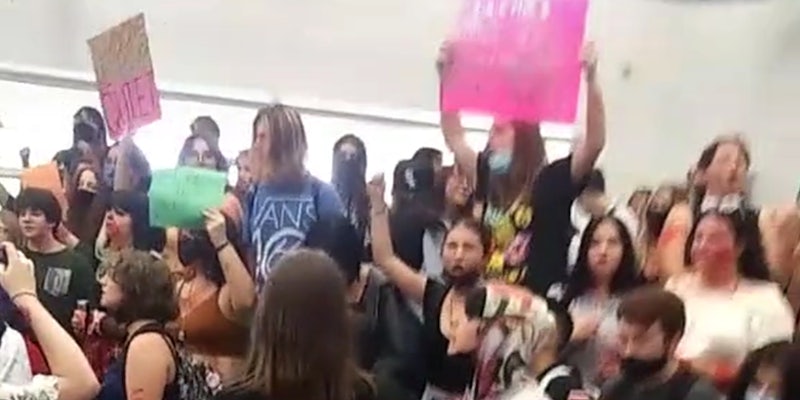 ‘We should not be walking around in fear’: Video shows high schoolers protesting in cafeteria after alleged rape

In a TikTok posted on Wednesday by @xxzenriquexx, high school students are holding a protest in a cafeteria and chanting, “What do we want? Justice! When do we want it? Now!”

In the overlay text of the video, @xxzenriquexx wrote, “They are protesting because a student raped a girl.” The clip has over 801,000 views.

The protest is just one of many at Marana High School that are happening in conjunction with protests at Mountain View High School. Both schools are a part of the Marana Unified School District in Arizona.

Honea told Tuscon.com that there are current freshmen at Marana being “sexually harassed.”

Marana students have also created a Change.org petition to assemble support groups and other resources for survivors of sexual assault and rape within the Marana High School community.

Other students are also posting footage of protests. In a video from @imsamirayahaira, students with red paint on their bodies yell and hold signs. Another video from @horrorstruck1 shows students standing with signs, including one that says “Rape is inexcusable.”

Marana High School said in an emailed statement to the Daily Dot that the school “takes allegations of sexual assault very seriously” and would follow the legal requirements of Title IX.

“The silver lining to this unfortunate series of events is that we have opened new lines of communication with our students so that we can begin taking steps to address their concerns, while also ensuring individuals understand our stringent policies and protocols for communicating/reporting this information,” the statement said.

The Daily Dot reached out to @xxzenriquexx, @imsamirayahaira, and @horrorstruck1 via TikTok comment and Mountain View High School through a Facebook message.