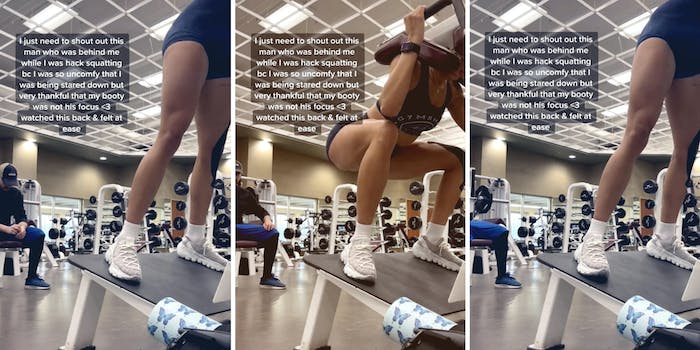 ‘Very thankful that my booty was not his focus’: Gym TikToker thanks man for not staring at her butt while she does squats, sparking debate

She filmed the stranger looking at the ground.

A video from gym TikToker Libby Christensen that went viral after being posted on Jan. 1 shows her squatting on an exercise machine. A man sitting behind her on a bench looks down at the ground.

“I just need to shout out this man who was behind me while I was hack squatting,” Christensen wrote in the video’s overlay text. “I was so uncomfy that I was being stared down but very thankful that my booty was not his focus.” She even said that watching the video back made her feel “at ease.”

Christensen’s video, which she paired with The Golden Girls theme song, was viewed almost 4.5 million times and got over 416,000 likes.

Some commenters on Christensen’s video illuminated the lengths that they go to to ensure that they are not stare at other gym-goers.

“When I’m in this position at the gym I have to move in fear of the woman thinking I’m a creep,” wrote @user3738789367919. “The uncomfortable feeling goes both ways.” Christensen responded, “It’s hard to gauge peoples intentions.”

“Especially when we all walk around in silence!” she commented.

User @dominicdevitis furthered the point. “There’s more guys doing everything they can to make sure it’s very clear they’re not staring at women in the gym,” they commented.

While others noted that the man in Christensen’s video may not have wanted to be filmed, a slew of commenters expressed that Christensen’s own outfit was to blame for her feelings of discomfort. To combat those comments, @ashleymatteson5 wrote that a woman’s outfit has nothing to do with how comfortable she feels when working out.

“I feel like some of y’all won’t be satisfied till females are wearing sweats & a turtle neck to the gym,” they commented. Christensen agreed, “Even then it’s not enough.”

The Daily Dot reached out to Christensen via email.