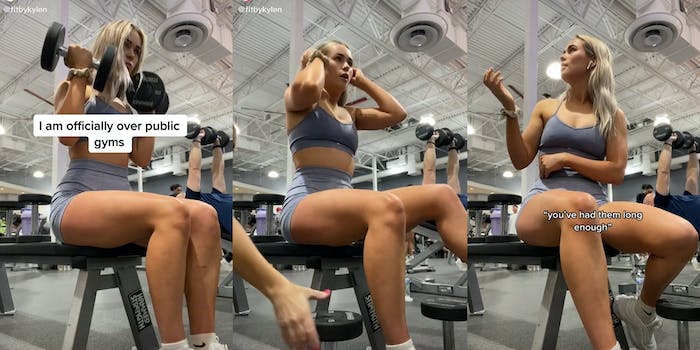 ‘I’ve been waiting for these for a really long time’: Karen snatches dumbbells from gym influencer who’s using them in viral TikTok

'I realllly hope this is a joke.'

TikToker and fitness influencer Kylen Suttner (@fitbykylen) posted a now-viral video of herself lifting hand weights in a gym until a person she calls a “Karen” snatches a dumbbell away.

The video, which currently has over 1.5 million views, shows Suttner sitting on a weightlifting bench and doing bicep curls with a pair of 15-pound hand weights. When she sets her weights down, a hand emerges from off-camera and steals one away from underneath Suttner.

“Oh, sorry. I was using that,” Suttner says.

“I’ve been waiting for these for a really long time,” the person off-camera responds. “You’ve had them forever.”

When Kylen says she’s almost done with them anyway, the thief does not relent, saying, “You’ve had them long enough.”

“I am officially over public gyms,” Suttner writes in the overlay text of the video, adding the hashtags #gymkaren and #karensoftiktok.

This set off a wave of confusion and frustration among TikTokers. First, many couldn’t believe that such an interaction actually happened.

“There’s no way,” reads one comment with over 30,000 likes. Another highly-rated comment echoes this sentiment, saying, “I realllly hope this is a joke.”

However, others were quick to share similar experiences from their time at the gym.

“A guy literally tried taking it out of my hand mid set. Becuz he ‘couldn’t’ use the silver ones,” recalled one commenter.

“I literally had a guy do the same thing with my bench I was using,” added another TikToker.

Suttner, who has more than 194,000 followers, told the Daily Dot that the incident in the video was not staged.

Asked what the woman should have done instead of simply stealing the weight, Kylen laughed. “They could find another pair of dumbbells!” She said the other woman “[could] report me to the front desk if they think I had them for an excessive amount of time,” noting that doing so was “still a Karen thing to do.”

As far as the video going viral, Suttner said she has been blown away by the response.

“It’s been crazy!” she says. “Crazy to see how many people something like this has happened to!”

TikTok commenters said they admired Kylen’s composure, noting that they would not have behaved as well.

“Oh hell no,” wrote one TikToker. “The other [dumbbell] would have been thrown at her head.”