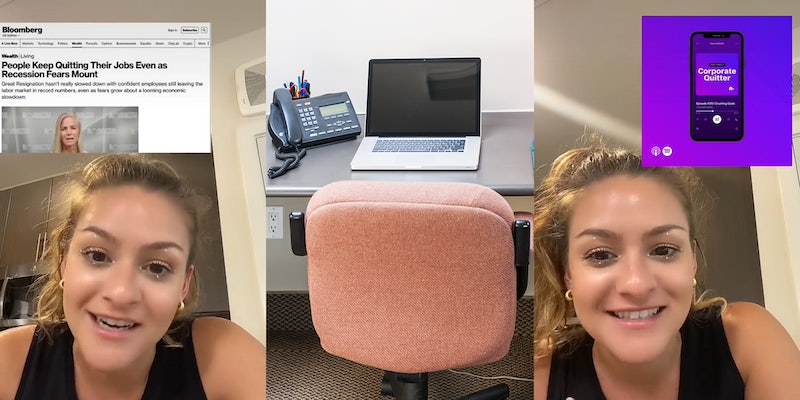 TikToker says that despite recession, young workers are at a ‘breaking point’ with corporate jobs in viral video (updated)

A TikToker says that despite the feat the United States is entering a recession and inflation is rising, people are still choosing to quit their corporate jobs in the Great Resignation because “we’ve reached a breaking point.” Internet users agreed, saying they “literally don’t care.”

Gabby Ianniello (@corporatequitter) posted the clip on Tuesday. According to her TikTok profile, Ianniello calls herself a “Great Resignation Baddie.” As of Wednesday, the video has accrued over 54,800 views.

In the clip, she says, “Despite the world being fucking what it is, which is bullshit, for the last two fucking years. And it’s only escalating and now we’re entering a recession, people still don’t give a fuck and they’re quitting. This is because again we’ve reached a breaking point. We don’t care, the money doesn’t matter, the fucking up-leveling your career, it doesn’t fucking matter.”

She continues, “The only thing that matters is my fucking mental health cause I’m about to fucking lose my mind,” she continues. “I would rather sell my fucking toenails or my used underwear or do anything else in the fucking world to make money other than sit at a fucking corporate job ever again in my entire fucking life.”

The clip shows a screenshot of a Bloomberg article titled “People Keep Quitting Their Jobs Even as Recession Fears Mount.” The article says that despite inflation, recession, and a turbulent stock market, workers—especially young people—keep quitting their jobs in record-breaking numbers. The Great Resignation began about two years ago when the pandemic showed people how “life is too short to get stuck in an unsatisfying job.”

One user said, “There is where I’m at too. The fear of a recession is not as bad as being in a toxic work environment.”

“Amen to this!!!!” commented another TikToker.

“Money is about to be worthless anyway. Why work for their fun while we get pressed in the trenches,” another wrote.

“I’m DED. I feel this on another level,” wrote another.

Others shared how they’re quitting their jobs too.

One user wrote, “Watching this on my last day at my corporate job.”

“I just quit my stressful job with no plan. Like cooperate 9-5s are not worth it!!” commented someone else.

The Daily Dot spoke to Ianniello about her Corporate Quitter project and her viral video.

Ianniello said, “When I started my channel a year ago, I did it for the sole purpose of authentically and vulnerably sharing both the ‘sexy’ and ‘unsexy’ side of quitting and discovering entrepreneurship. So many people on the internet make fake promises, overcharging for programs they’re not qualified to sell, and I was sick of being told ‘you can make 6-figures in 2 months’ which is BS. I wanted the REAL story, the REAL struggle which I couldn’t find, so I sought to create that.”

She continued, “I simply reached a breaking point – after years of office politics, backstabbing coworkers, and being overworked while undervalued, I was willing to take the risk of having any and every worst-case scenario situation if it meant personal fulfillment. My mental health and time freedom is the most important thing, which I found that even the most “modern” 9-5 jobs or startups couldn’t offer.”

When asked why she thinks many young workers feel so similarly, Ianniello said, “Although this may seem “hopeless” it’s also really empowering for those who are READY to finally say YOLO in every facet of their lives and take the leap in discovering other means of surviving (with the ultimate goal of thriving).”