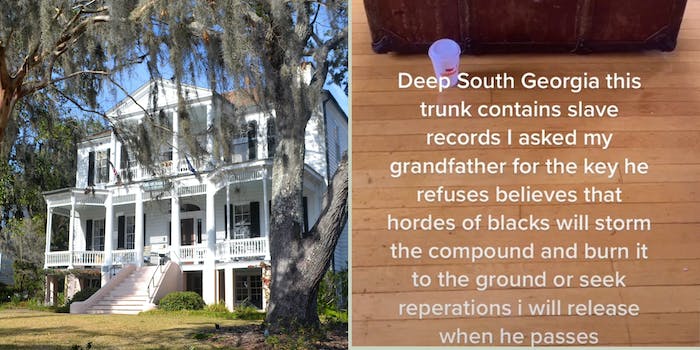 The older man refuses to hand over the key.

A TikToker says that his white grandfather refuses to hand over the key to a trunk that contains slave records because the older man believes the souls of former slaves will “storm” him and ask for reparations.

User @leogorcey, who posted the video on Friday, wrote that the trunk is located in “deep South Georgia.”

“I will release [what’s in the trunk] when he passes,” @leogorcey wrote in the video. By Tuesday, the TikTok had been viewed almost 535,000 times.

In the comments of the video, @leogorcey wrote that a woman sought records from his grandfather in 1989 and that his grandfather lied to her and said that “none existed.” The TikToker also made a video apologizing to the woman.

“Many [white] families have this stuff,” @leogorcey commented, referring to artifacts related to slavery. “It’s not spoken about or exhibited to outsiders.”

Other commenters on the video discussed how the TikToker’s grandfather was preventing many Black people from being able to learn about their ancestry and familial history.

“It’s crazy he feels that way because Blxk [Black] people are looking for answers like me,” user @courtdawgdmv wrote.

“Crazy how 1 person can hold back so many people from knowing [their families] outta pure fear that he’ll face his karma,” @rivviera added.

Others suggested that @leogorcey pick the lock on the trunk or donate it trunk to a museum.

“It tells us a lot about the past of the US and it’s important for people to see,” @ghostdaddyluvsu commented.

The rest of @leogorcey’s account is focused on his grandfather’s possessions in his 18,000-square-foot “compound.” The TikToker has posted videos about his great-great-grandmother, who he says owned slaves.

He has also made content about objects that his grandfather took from Japan when it was occupied and photographs that were taken during segregation. The majority of videos that @leogorcey has posted have gone viral.

The Daily Dot reached out to @leogorcey via TikTok comment.