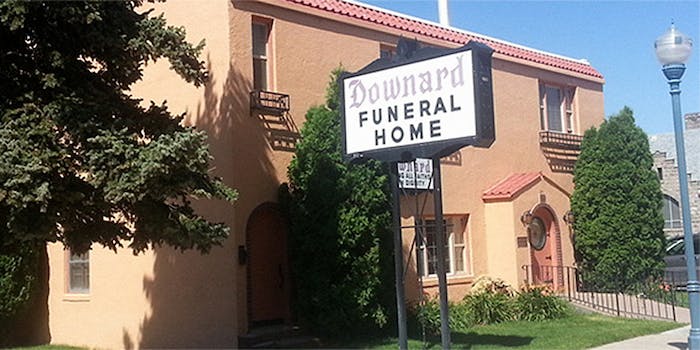 ‘Most pugnacious smell ever’: Funeral home gets review bombed after discovery of rotten bodies

A TikTok posted Friday to the account @truecrimecam2 details the discovery that a horrible smell emanating from an Idaho funeral home was likely the scent of decomposing bodies.

In the video, a TikToker who goes by Cam, presents a one-star review of Downard Funeral Home & Crematory in Pocatello, Idaho, from two months ago. “Services were beautiful but was ruined by the most pugnacious smell ever,” the review says, likely confusing the word “pugnacious” with “pungent.”

The TikToker said she finds the review “disturbing to read after the news that just came out about this funeral home.” The news she is referring to is the discovery of 12 decomposing bodies and approximately 50 fetuses that were scheduled for cremation.

According to a  Sept. 2 news release, Idaho State University had a relationship with Downard until 2020, which is how the fetal remains came to be in the home’s possession. In 2017, after the passing of a state law prohibiting public universities from using fetal remains for study, the university gave its collection to Downard to be cremated.

After the relationship was terminated, the university became aware that something was amiss with Downard because families reached out saying that the cremains of their donated loved ones were never returned, according to the Idaho Division of Occupational and Professional Licenses report. The university performed an internal audit that revealed several instances where Downard allegedly donated remains to the institution, but no records of these donations exist.

“At no time during the University’s internal audit was it discovered that the fetal remains were never cremated,” Idaho State University stated in the news release.

Following TikTok custom, Cam encouraged her 100,000 followers to leave the business negative reviews. Despite the popularity of the video, which has received almost 3 million views and over 500,000 likes, it seems that just over a dozen have followed Cam’s advice.

With only 18 reviews on Google and four on Yelp, Downard is not being given the barrage of bad reviews that businesses often receive after being put on blast on TikTok. Still, one review

Most of Downard’s reviews are, in fact, positive. There are over 60 reviews of Downard on Tribute Archive, an online obituary and memorial site, and all of them offer thanks and praise.

Most of the bad reviews are from the past week and don’t include comments, which indicates that they are probably fake ratings made after the controversy. However, comments from months and years ago that imply Downard has a history of mishandling remains.

A one-star Google review from six years ago states that Lance Peck, the owner and mortician of Downard, told the poster, Katie Carlson, that he would send her father’s ashes to her uncle in Alaska. “It was recently brought to my attention that my uncle never received the box of my father’s ashes,” Katie wrote.

This is not the only time the remains of a loved one have allegedly gone missing after being in Downard’s care. According to a report by the Idaho Division of Occupational and Professional Licenses, Peck was placed on probation for six months in 2015 for “failing to ensure that a decedent was embalmed and donated to Idaho State University” and “failing to create and maintain records relating to the disposition of the decedent’s remains.”

Following this incident, Peck was placed on probation for two years and had his license suspended for six months for “failing to carry out instructions for disposition” in 2018. He was also placed on a two-year probation in 2016 for “operating a crematory with an expired license.”

There are a lot of questions about why the remains weren’t cremated in the four years they were at the home. Commenters under Cam’s video question whether the remains were being sold or eaten.

Downard Funeral Home did not immediately respond to the Daily Dot’s requests for comment via email and telephone.