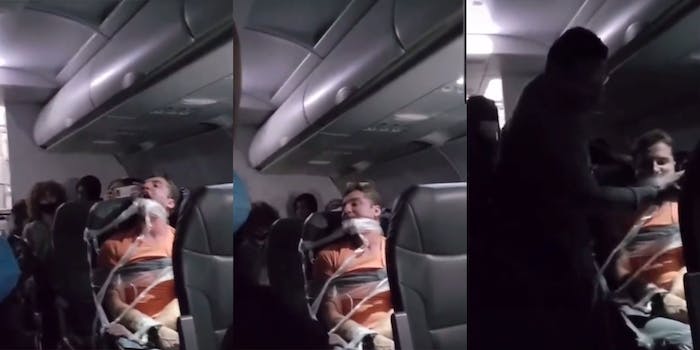 ‘He can stay put in that chair ’til they land’: TikTok shows flight attendant restraining drunk passenger, sparking debate

In a TikTok posted on Tuesday, a passenger on a flight yells for help after being restrained to his seat with what appears to be plastic wrap. The passenger is unable to get out of his seat, and a flight attendant puts material over his mouth to stop him from yelling.

The TikTok seems to be footage from a Frontier Airlines flight from Philadelphia to Miami. According to CNN, the passenger in question is Maxwell Wilkinson Berry, who was intoxicated on the flight. Berry allegedly groped two female flight attendants and punched a third flight attendant in the face.

CNN reported that Frontier Airlines supports the flight attendants’ response to the situation and will pay them for their work on the flight Berry was on. Berry was charged with three counts of battery.

“Dude assaulted people/staff on the flight. He can stay put in that chair till they land. Stop defending him,” wrote @prettysnakeboyy in the videos comment section.

Others worried for the man’s safety, saying his airways might have been restricted if he had trouble breathing through his nose. Some mentioned that federal air marshals should have dealt with the situation, although it’s unclear whether or not there was one on the flight.

The Federal Aviation Administration has a “zero tolerance” policy when it comes to unruly passengers. Passengers who don’t follow the instructions of flight attendants are “subject to tough penalties,” like fines and jail time.

The FAA’s description of its zero-tolerance policy doesn’t seem to include information on restraining passengers. But it does include aviation memes.