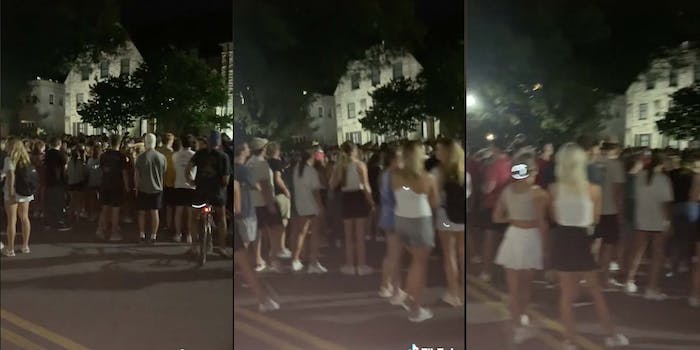 In a viral TikTok posted on Tuesday, students from University of Nebraska-Lincoln protest the fraternity Phi Gamma Delta, known as FIJI, and yelling “rot in hell.” The video was posted by Will Green (@simp4icarly) and is captioned “kick FIJI off UNL campus.”

According to KLKN, a local Nebraska news outlet, the protests was in response to an alleged sexual assault at the FIJI fraternity house on Monday.

In a comment on the video, Green confirmed that the protest was in response to the alleged sexual assault on campus. Footage of the protest that was posted on Reddit showed students chanting that they want justice, an. A clip posted on YouTube shows students yelling “fuck FIJI” and “kick them out.”

A Change.org petition titled “BAN FIJI FOREVER (UNL)” alleges that “13 girls have been raped so far as to be left on the lawn naked and bleeding” and asks people to sign to ensure that the assailants and fraternity face consequences. More than 75,000 people had signed the petition by Wednesday.

In response to the protests, the University of Nebraska at Lincoln Chapter of FIJI issued a statement to KLKN and KOLN saying that the fraternity is investigating “recent allegations of sexual assault that involve one of the student members of the fraternity,” and that the allegations “absolutely do not meet our fraternity Code of Conduct.”

FIJI’s statement also said that no charges have been filed to campus police or other local police departments.

The Daily Nebraskan, a student-run publication at the University of Nebraska, reported that the university suspended FIJI in 2017 for harassment.