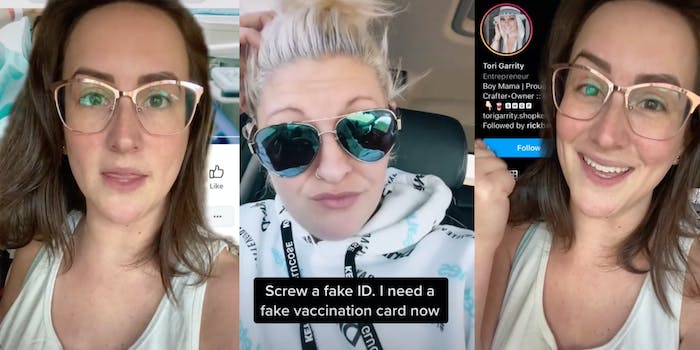 It's escalated into a full-on TikTok feud.

A nurse on TikTok may be regretting her decision to post a video documenting her desire to acquire a “fake” COVID vaccination card, after a frustrated TikToker absolutely shredded her for it.

More than half a million people have succumbed to COVID-19 in the last year, and more continue to die every day. Despite this, a pediatric nurse on TikTok felt it was appropriate to post a video flaunting her disregard for the threat COVID-19 continues to pose. In response, TikTok user @rx0rcist, who goes by Savannah on the platform, utterly castigated the woman in a series of videos.

The first video begins with a shot of the nurse gloating about falsifying a vaccination ID card. Moments later, Savannah tears into her.

“Why do y’all make it so easy,” Savannah asks before launching into a breakdown of her genuinely impressive sleuthing efforts. First, she noticed that she lists herself as a “pediatric trauma RN (registered nurse)” on her TikTok profile. She used that to track down her place of work. She was—emphasis on the was—a registered nurse.

“But bitch, since you’re a big gangster, you won’t mind that people pop onto your employer’s Facebook page and share the good news,” Savannah says, noting that the nurse works with “medically fragile children” but still “wants to lie and deceive people into thinking she’s been vaccinated.”

“I know that if you were in charge of my child’s care and intentionally lied to deceive people about being vaccinated, not only would I throw a complaint, but I’d throw these fucking hands.”

In the comment section for Savannah’s first video, people expressed their disgust and horror that a medical professional would post such a video, even as a joke. “Healthcare workers can’t make ‘jokes’ like this,” TikTok user @Arizona wrote. “It causes people to doubt the safety of the healthcare system. It’s that simple.”

As correctly noted by another user, A.I. duPont, the hospital where the nurse worked claims she is no longer employed there. “We are aware of a TikTok video relating to a fake vaccination card,” a Facebook post from the hospital reads. “The person who posted this video has not been a Nemours employee since August 2020. Please help us by letting others know this person is not a Nemours associate.”

Savannah uploaded another video in response to the new information. In it, she apologizes to the hospital for “the barrage of comments they have gotten on their social media,” but notes that her video still needs to be seen.

While she notes that, regardless, “healthcare professionals are held to a higher standard,” Savannah also makes it clear that the nurse was not joking. Her TikTok page is rife with anti-masker content and strange conspiracy theories about President Joe Biden.

After Savannah’s second video went live, the drama mounted. Tori Garrity, the nurse who posted the first video, caught wind of the critical videos and posted a response. Seeming angry and defensive, Garrity lashes out at Savannah for not tagging her in the original video, robbing her of the chance to defend herself.

“You know what goes around comes around, right,” she asks. “This shit that you’re doing for clout is gonna catch up.”

Then she posted another video. Soundtracked by a jarring cover of Linkin Park’s “Crawling,” Garrity identifies Savannah’s place of work at a lactation consulting agency. The caption for the video demands that Savannah “take (the videos) down.”

Yet another upload from Garrity attempts an “ah ha” moment with one of Savannah’s old videos. In the old video, Savannah identifies doxing as a nuanced and complex thing, and notes that it can easily lead to violence.

This video finally prompted a response from Savannah.

Referencing Garrity as an “absolute fucking nutjob,” Savannah notes that she is “anti-science and a COVID-denying Trump supporter,” but does concede that Garrity’s response, calling her out for previously criticizing doxing, was fair.

“I’ve since realized that public information, shared on a public forum, is not doxing,” Savannah says. She notes that this is why she’s been so harsh with healthcare professionals throughout the pandemic. “I have not obtained any of this information by illegal means. Most of this information that I get they have shared themselves. So while its super cute that you made a dramatic video exposing my business page, baby I regret to inform you that my business page has been linked in my bio for about a year. But I do love that you’re threatening to post my home address if I don’t take these videos down. Good luck with that patriot!”

The video is Savannah’s most recent. She posted it in the late hours of Thursday evening, and will likely be thrilled to wake up Friday morning to two fresh videos from Garrity.

At the end of the first video, Garrity sleepily notes that Savannah’s information, along with her husband’s, is publicly available online. She ends with a threat to “let the people decide” whether she should dox Savannah in return.

The people apparently decided. A final post from Garrity, which went up while this story was being written, shows the negative reviews flooding the Facebook page of Savannah’s business. Many of the recent reviews are negative, citing the TikTok spat as a reason to avoid her. All of the reviews that precede the online drama are positive, however, and the comparably small number of negative reviews only brought her rating down to a 4.7 out of 5.

Savannah has yet to respond to Garrity’s most recent videos, but this TikTok drama seems to be far from over.

The Daily Dot attempted to reach out to both Garrity and Savannah, but Garrity’s TikTok account only accepts message requests from friends. Savannah has not yet responded to a request for comment.