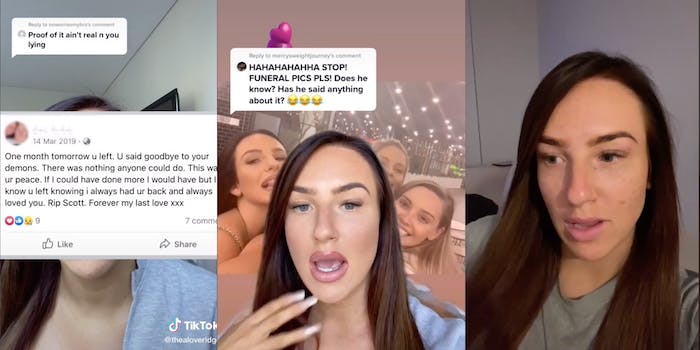 One TikToker answered the call for duets of petty stories by rehashing the story of faking the death of her cheating ex, which he went along with.

Times Now News reports that Thea Loveridge, a hairdresser from New Zealand, shared her story on April 20, stating that she held a fake funeral to convince her ex-boyfriend’s side piece that he had died.

“OK so, my baby daddy’s a real piece of shit, and after I had our son, I found out that he was cheating on me the whole time I was pregnant with his ex-girlfriend,” Loveridge said. “It caused all this drama in our relationship, and he ended up going to jail shortly after.”

“And she was messaging him trying to figure out where he was, confused why he wasn’t talking to her, so I messaged her and told her that he was dead.”

Loveridge said she had the help of his sister to corroborate the story and really sell the idea to the woman her ex was cheating with.

“We had a fake funeral and everything, and we sent her photos from the funeral, and it’s been three years and she still thinks he’s dead,” Loveridge said.

Loveridge said this woman shares Facebook post tributes every year about how she wishes she could have been there to “save him.”

In follow-up videos, Loveridge said that her ex-boyfriend went along with this, although it was partially involuntary—she says he “went to jail” for assault soon after this and the woman had moved. He couldn’t write her without her new address.

Commenters on her video series just couldn’t believe no one had clued this woman in.

“Wait so for three years not ONE PERSON that knows both him AND her told her that he was in fact not dead???” User @athenasworld444 said.

Another user suggested that efforts to re-establish contact from Loveridge’s ex may not be welcomed at this point.

“When he gets out of jail and messages her and she’s like ‘that’s not funny how could you impersonate a dead person what’s wrong with you *block*,'” @ashleynicholelavine wrote.

Since Loveridge said he’s played along up to this point, this suggestion may not be out of the question.

“Next year get him to comment ‘quit telling everyone I’m dead,'” user @notaflyingtoy wrote.