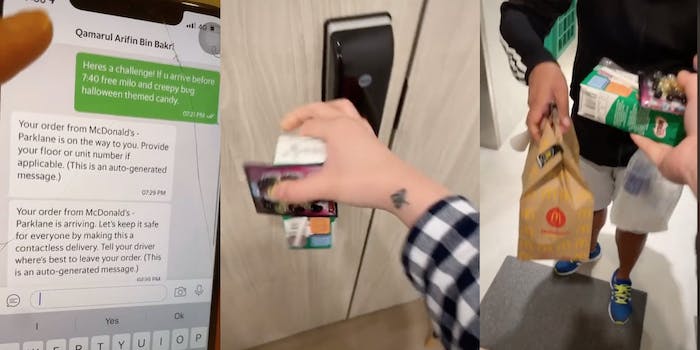 ‘Hope he spat in your food’: Viewers upset after TikToker challenges food deliverer to bring order quickly in exchange for candy

'This made me really sad.'

A popular TikTok user is facing backlash online after filming herself bribing a food delivery driver to show up at her home quicker.

In the video, Erica Chan, a Singapore-based TikToker with over 94,000 followers, promised to give the driver candy if he arrived before the time mentioned on the delivery app.

Since being uploaded, the footage has been viewed nearly 200,000 times. While staring at her phone, Chan can be heard commenting on how fast the delivery worker is moving in order to reach her door in time.

But users aren’t finding the incident as funny as Chan did. The video was flooded with comments from TikTokers who felt that Chan had not only endangered the driver but had taken advantage of him as well.

“Hope he spat in your food,” @chicken.nugget69 wrote.

Chan responded to the backlash by challenging yet another delivery driver to rush to her home.

That video goes on to show Chan only giving the delivery person a bottle of water, not candy, after they failed to reach her home in time.

Yet the responses were much of the same. Users once again accused Chan of mistreating delivery drivers.

“Sorry sis, but this ain’t it,” @0konomiyaki said.

“This made me really sad….on top of it recording it just for entertainment at other peoples cost,” another said.

After the backlash began garnering more attention, Chan uploaded a third video on the issue and again pushed back on allegations that she was endangering workers by making them rush.

Despite the growing backlash, Chan doesn’t appear interested in backing down anytime soon.

The Daily Dot has reached out to Erica Chan.