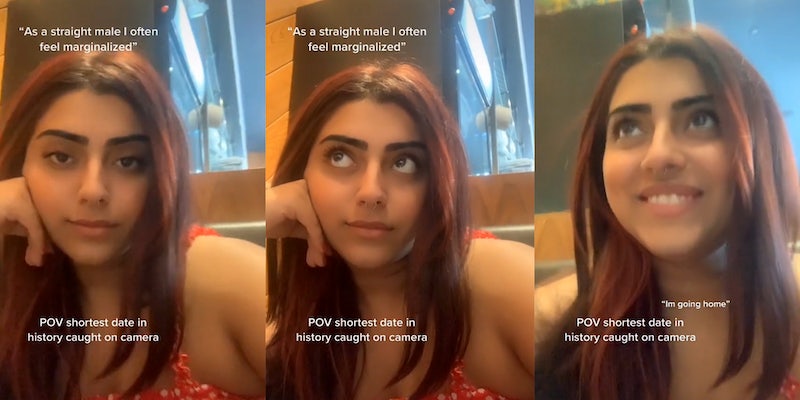 ‘Shortest date in history caught on camera’: TikToker’s date tells her he feels ‘marginalized’ as a ‘straight male’

'Getting their feelings hurt doesn't mean they're being oppressed.'

In a viral TikTok video, a woman records her “straight male” date claiming to be “marginalized”—and she promptly leaves. The clip sparked debate on the difference between sore feelings and marginalization in the comments.

“POV shortest date in history caught on camera,” the on-screen text reads as the user @javeeeeeeeeee points the camera at herself.

Off-screen, her date says the dreaded line: “As a straight male, I often feel marginalized.”

The TikToker appears to think for a moment before deciding she’s had enough. “I’m going home,” she says with a smile.

The brief video, shared Saturday, garnered over 3.8 million views and almost 20,000 comments. Though one of the hashtags listed in the caption is “#joke,” it’s unclear whether the video is staged or not.

“Men can’t live with them can live without them good thing I didn’t waste time getting ready lolz,” the TikToker captioned the video.

But she received criticism from users suggesting that she was ignoring his feelings. “Girl could not take any difference in opinions,” one user said.

“Even if you think what he said is absolutely bizarre, men don’t get listened to enough about their feelings. Could’ve had a decent discussion with him,” another commented.

Others simply agreed with her date.

“Honestly this proves the point I make all the time. Racism and marginalisation has switched and now if ur a straight white male ur automatically wrong,” one user commented.

But the TikToker defended herself in the comments.

“One quick thing I’m allowed to leave even if he said nothing at all that’s the beauty of choice … getting mad at me for leaving is [caution emoji, red flag emoji],” she wrote.

Other users reacted to the comments criticizing the TikToker’s decision to leave.

“Men in these comments need to realize that getting their feelings hurt doesn’t mean they’re being oppressed LOL,” one user said.

“Y’all r like ‘u proved his point’ do u understand that one singular person not sticking around to listen to ur opinion is not marginalization,” said another.

Naturally, the definition of “marginalization” was brought into the discussion as well.

“I’ll take a wild guess that this man has absolutely no idea what the word marginalized even means,” one user commented.

A few comments prove that not everyone knows the definition of “marginalized.”

“I’m too lazy to look it up but someone tell me what marginalized means,” one user said.

According to the Merriam-Webster Dictionary, “to marginalize” is “to relegate to an unimportant or powerless position within a society or group.”

Some users speculated that the video was fake and questioned why the TikToker had been recording the date.

“I couldn’t tell if this was real or staged but then I saw the pressed men in the comments,” one user said.

The Daily Dot was unable to contact user @javeeeeeeeeee.