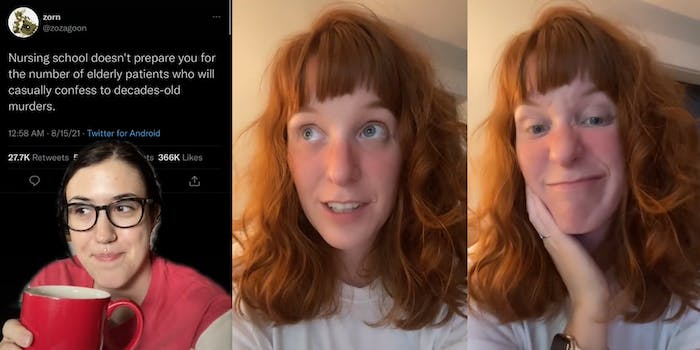 The patient allegedly said the man was killed by a racist mob.

In a viral TikTok video, user @benzosandespresso says she’s a nurse and recounts the alleged deathbed confession of a woman whose “heartwrenching” lie led to the torture and murder of a Black male.

According to the TikTok user, the woman was dying of COVID-19. “She told me that when she was a teenager, she told her mother that one of the local Black boys had touched her behind the local grocery store,” the TikToker says, adding that the incident took place in 1936 in Louisiana.

The video, which has since been deleted, was shared on Sept. 12 and three days later had more than 15 million views.

“Not only was the boy lynched, but he was beaten, and his genitals were cut off,” the TikToker says the patient told her. “And then the family home was burned to the ground. And she watched it all happen. You wanna know why? Because she saw that his sisters had prettier dresses than she did. And she just didn’t like it. So she lied.”

The TikToker explains why, unfortunately, this patient’s confession made sense.

“And then it clicked. This same woman had been hallucinating for the past couple of days, saying there was a Black boy in her room watching her, would not stop staring at her, and she was scared shitless,” the TikToker says.

She then recalls the patient asking for forgiveness. “I told her the only person who could forgive her was the boy she killed,” she says.

In a follow-up video, which has also been deleted, the TikToker offers possible proof for the patient’s confession with an article from the New York Times. She says she will not release the victim’s full name because she doesn’t have permission from the victim’s family.

In the video, the TikToker shows an image of the article and reads it aloud. The article describes the racist lynching of a 26-year-old Black man named Andrew who was killed by a mob of 300 people after being accused of trying to “attack a girl.”

“[Andrew] beseeched the mob to let him live, but he was carried to the courthouse, a block away, and was hanged from the branch of a spreading oak tree on the courthouse lawn,” the article says.

The TikToker acknowledges that the article doesn’t necessarily confirm her patient’s story. “I’m just drawing similarities between the time period, the parish, what happened, and some other things she told me that I didn’t even tell you guys about, that I’m gonna keep for patient anonymity purposes,” she says.

But the TikToker says the report took place in the “same time period” and “same parish” as the story her patient told her. To conclude the video, the TikToker brings attention back to the victim.

The Daily Dot reached out to @benzosandespresso via TikTok for comment but did not immediately hear back.