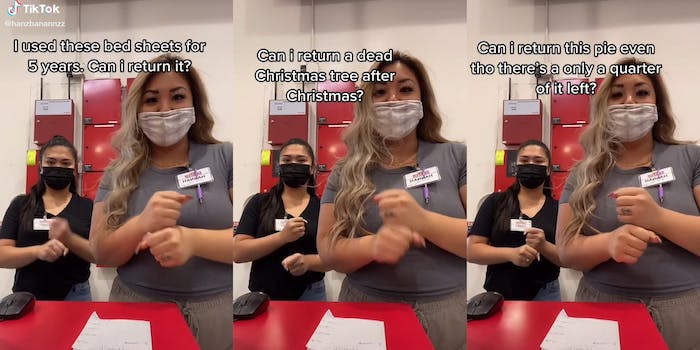 We all wonder when or if we can return items that haven’t met our expectations after some use. But TikToker @hanzbanannzz, who says she’s a Costco employee, broke down some appalling refund requests in a video that gained over 2.8 million views in three days.

In the video shared on Saturday, the TikToker and another employee do the “chopping dance” at their workstation while onscreen text highlights bizarre examples of Costco’s generous return policy. “Returns at Costco be like,” the video caption says along with woozy face emoji.

“Questions we get all the time at refunds,” the rolling text says, followed by examples of customer return questions.

The first question is, “I used these bed sheets for 5 years. Can I return it?” According to the video, the answer is, “Yes! U get a full refund”—and a woozy face emoji.

The second question is, “Can I return a dead Christmas tree after Christmas?” with the reply, “Yes! You’ll get a full refund.”

Just when you think requests can’t get worse than worn sheets and decayed pine needles, @hanzbanannzz shares the last question.

“Can I return this pie even tho there’s a only a quarter of it left?” the caption says. “SURE!” is the reply. Here’s ur money back.”

It’s unclear if the customer questions in the video are based on real experiences, but users flooded the comments with questions about returns. In another video, @hanzbanannzz says that customers don’t need a receipt to make returns but that having the item’s tag or box will help if there’s no receipt.

Still, the TikToker says employees can use members’ accounts to look up their previous purchases before going through with a return.

According to Costco’s website, the retailer accepts returns on most products with some exceptions. Electronics, for example, must be returned within 90 days, and items with limited life expectancy like tires and batteries may have specific warranties.

Commenters shared their own Costco return stories—and expressed anxiety about trying an out-of-the-box (pun intended) return. “My social anxiety could never,” one user wrote. “I’d be so embarrassed.”

The Daily Dot reached out to Costco via the company’s media request form but did not immediately hear back.

Update 4:00 pm CT Sept. 18: In a statement to the Daily Dot, the TikToker confirmed she’s been a Costco employee for 10 years. She said she didn’t expect her video to be “too big of a deal” since she previously saw other Costco employees answering questions about the store on TikTok. She has since deleted the video.

“I had to take it down recently because i didn’t realize how viral it was going to get and it wasn’t worth affecting my job,” @hanzbanannzz told the Daily Dot. “My coworker and i were always thinking about making a questions video like that about our department at work because Costco really does have the most generous return policy and we just wanted people to know. The message may have been interpreted wrong by some, but that was the message we wanted to get across. It was a slow day (which we never have) and we just decided to do it.”