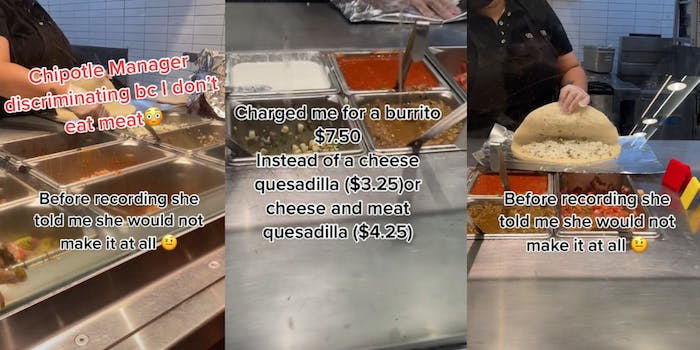 ‘You need to relax’: TikToker claims Chipotle worker is discriminating against her for not eating meat—it backfires

That didn't go as planned.

In a viral TikTok posted Thursday, user @espibandini films a Chipotle employee and alleges that she was discriminated against for not eating meat. But the complaint backfired.

In the video, which by Friday had 100,000 views, the TikToker asks for cheese and white rice on a quesadilla. The employee says that she will have to charge it as a burrito instead.

The TikToker responds, “Just charge me as much as you want, I just want that.”

Overlay text on the video reads, ”Before recording she told me she would not make it at all.”

As the video gained thousands of views, people left comments claiming that she was wrong for calling the incident discrimination.

User @liv.gonza wrote, “You were not discriminated [against] at all, People love to be the victim all the time.”

The vegetarian TikToker explains in several follow-up videos that she did not record the entire interaction with the Chipotle employee.

“I didn’t record for the beginning because I didn’t expect her to be extremely rude to me,” @espibandini says.

Chipotle did not immediately respond to the Daily Dot’s request for comment.