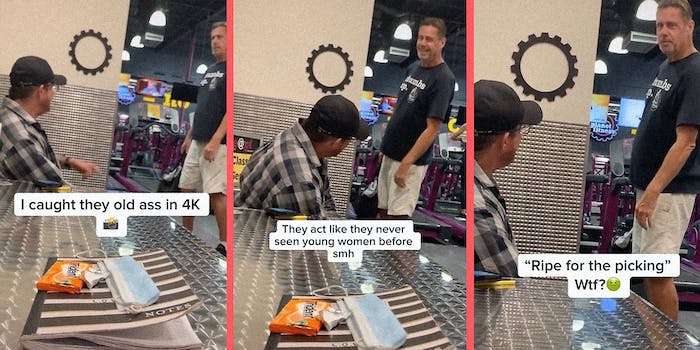 'I played it out loud so they could hear it.'

A TikTok user caught two men commenting on a woman’s body and smell while she exercised at a Planet Fitness in Florida. The TikToker later confronted the men with the video of their conversation.

In the video, which was posted May 24 and has over 1.8 million views, user Charlie Banga (@charliebanga) discusses his interaction with the men and plays a clip of their conversation.

The clip shows the two middle-aged men, one seated across from the TikToker and the other standing, both looking at a young woman running on a treadmill in front of them. They discuss how they saw her outside and were attracted to her smell.

“Ripe for the picking,” the other says.

“The smell of a woman walking by you…” the first man responds. “I was in prison for three years; all I smelled was dirty ass men. A girl guard walked by, you were like, ‘Oh my god.’”

The clip cuts off as the other man begins another anecdote about a vacation. The TikToker says to the camera that he usually minds his own business when he goes to the gym, but he had to confront the men.

“I guess these men felt like they could speak freely around me, say whatever was on they mind,” he says. “And at first, I wasn’t even listening to them, but then they started saying some wild shit, you feel me? So I started recording them.”

Charlie says he showed the men the recording to show them what they look like when objectifying a woman.

“After I finished recording, you know what I’m saying, I played it out loud so they could hear it. I was like, ‘Y’all are nasty as fuck, man,’” he says. “I got mad, because she didn’t even know what was going on, you feel me? And I just knew that was some fucked-up shit.”

Charlie described the men’s responses in a comment: “They were looking all scared and dumbfounded, couldn’t even say shit bc they knew they were dead wrong smh.”

He says he didn’t tell the young woman what had happened because he didn’t want her to feel embarrassed or uncomfortable.

However, he says he did get the middle-aged men to leave the gym.

“I was like, ‘Man, y’all better move the fuck from around here, and if I see y’all doing that shit again, I’m going to smack the shit out ya, straight up,’” Charlie says in the TikTok. “I don’t care if I go to jail. I don’t care if you tell, because y’all are in the wrong.”

Becky Zirlen, director of public relations for Planet Fitness, told the Daily Dot in a statement that the franchise owner revoked the men’s memberships.

“As home of the Judgement Free Zone, the safety and privacy of our members and employees is our top priority, and we take this incident extremely seriously,” Zirlen said.

Many women echoed this experience in the comments, some noting that voicing their discomfort is often viewed as an act for attention.

“Playing it back to them is GENIUS,” one user said.

Charlie responded, “So they could be as uncomfortable as they made the young lady.”

The Daily Dot reached out to Charlie for comment.

Update 1:09pm CT, June 23: This story has been updated with a statement from Planet Fitness.