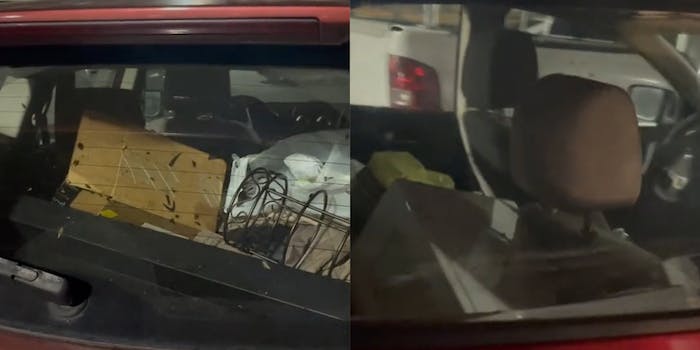 ‘Call the cops to do a welfare check’: TikToker finds car full of roaches—and viewers fear the worst

A viral TikTok video shows a car infested with roaches parked in front of a Burlington Coat Factory store in South Carolina.

On Friday, @trishyryno filmed and posted the video, which by Monday had over 19 million views. She approached the orange Nissan in the parking lot.

“We just got out of the car at Burlington,” she says in the video. “Look inside this car.”

It’s horrible: The inside of the vehicle is filthy and full of roaches, to the extent that many commenters on the video believe there could be something dead inside.

“Oh, my God, they’re everywhere,” the TikToker says in horror.

Some commenters made jokes, but others were concerned. One woman wrote, “Call the cops to do a welfare check… might be a dead body or dead pet.”

In a follow-up video, @trishyryno said she ended up having to delete subsequent videos about the roaches because of character attacks.

User @meganboeckholt’s commented, “In a more recent video she said that the owners came out of the store with an infant…[and] she still didn’t call the police. But @trishyryno said that she didn’t know what to do.

“I asked my boyfriend what to do, and he didn’t know,” she says. “I had four followers; I thought no one was going to see this ever. And I got back on it, and people are just freaking out.”

She explains that she did call Child Protective Services about the family and the car full of roaches, but people are adamant that she should’ve called the police.

The Daily Dot has reached out to @trishyryno for comment.