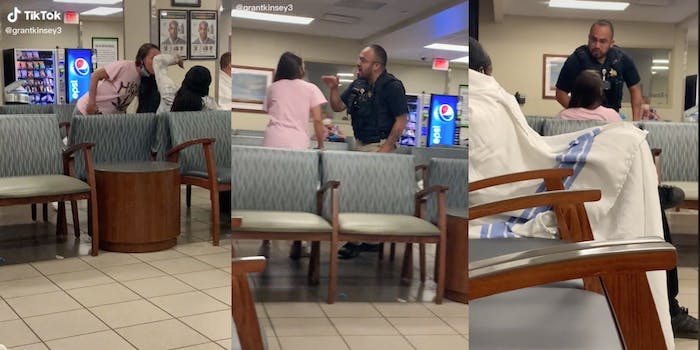 ‘He matched the energy’: ER security guard shuts down Karen who was screaming at patient in viral TikTok

'Do that again, I'll kick you out myself."

A video showing an ER security guard’s response to a Karen who was loudly engaging other patients in a waiting area has gained 43 million views and 7.4 million likes on TikTok.

Posted on Sunday by @grantkinsey3, the video shows a woman in a pink T-shirt yelling at another patient in an ER waiting area without her mask on. Then from around the corner, a security guard walks up to her, and shouts at her, “Stay away from other people, you hear me? If you don’t want to stay in this fucking chair get the fuck out. Do that again I’ll kick you out myself,” followed by prolonged and direct eye contact as he walked away.

The poster, @grantkinsey3, said in a follow-up video providing additional context, that this kind of thing “happens a lot” in Tulsa, Oklahoma, where he said that this incident took place.

“All of the sudden, I’m sitting there on my phone, this woman just comes back, I think she’s going out to have a smoke, the woman in the pink, and she walks by the girl sitting down and then turns around—the girl didn’t say anything, because I think she was talking to the girl next to her maybe, not even talking to the girl in the pink—and then the girl in the pink just starts getting up in her face over nothing,” he said. “Literally nothing. Just yelling and screaming.”

It was then that security got involved, although he said he isn’t sure if the security officer had been called or had heard what was happening before intervening.

“I wish I had more details on it but the nosey part of me wants to know exactly what was going on with her, but I’ll never know that,” he said.

The security guard drew much praise in the 97,300 comments that were left on the video.

“As a healthcare worker, I love and respect hospital security so much,” one commenter wrote. “They deal with patients causing issues or trying to hurt staff or other patients.”

Among those supportive comments, some suggested that the woman was in crisis and the situation could have been handled differently.

“Matching the problem is not solving the problem,” another commenter wrote. “There is nothing respectable about this man’s behavior.”

However, there was a second star of the show. Halfway through the video, a man sits down right near the action in a blue-trimmed blanket, drawing comparisons to Mother Teresa, who was known for wearing robes that were similarly decorated.

“Even Brother Teresa had to sit down!” one commenter wrote.

The Daily Dot has reached out to @grantkinsey3 via TikTok DM.