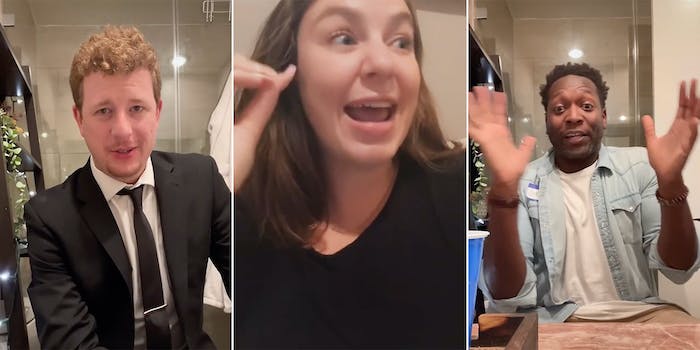 In a now-viral series of TikToks, Cassidy Davis (@cassidynashdavis) holds a Valentine’s Day blind-date party for herself and her single friends with people they met from dating apps like Tinder.

Davis first pitched the idea of the party and its rules to her followers in a TikTok on Jan. 20.

“You have to bring a random person that you’ve matched with on a dating app, ideally you haven’t been on a date with them yet,” Davis explains in the clip. “You have to bring a bottle of alcohol to drink and then you show up to someone’s house and play drinking games.”

On Sunday, Davis replied to a comment asking for an update on the original post with a video letting viewers know that she would be hosting the blind-date party that night.

“This got way more chaotic than we thought. I had 10 to 12 single girls, and they all had guys confirmed but then yesterday a bunch of guys backed out,” Davis says in the follow-up. “In the last 24 hours, my friends and I have been on every dating app swiping like crazy and telling all these random men to come to this party tonight.”

While the original intention was to have an even number of single pairs arrive at the party, Davis’ dash against time to replace the men who backed out was more successful than she had anticipated.

“I think I have between five and 65 men coming,” Davis says. “These men keep asking if it’s going to be a sausage fest and I keep lying and saying ‘no.’”

“Confession: I did not invite one man to this party,” said Kara, one of the single women. “But I’ve met all the men and I think one guy might like me.”

One man said he was “nervous” because the party looked like Jordan Peele’s thriller Get Out. “Bunch of white people. Only brother around,” he said. “What do you know, there’s six other Black people here. What else is [more] fucking Get Out than that?”

“I was dragged here against my will, and I’m looking for the love of my life I think,” said Jenna, another participant. “Or to get home alive. Either or.”

The Daily Dot reached out to Davis via TikTok comment and email.