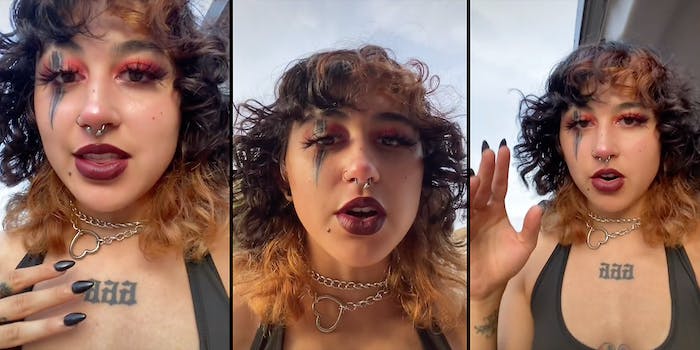 ‘I don’t want your f*cking Bible’: Christian dude harasses goth TikToker because of her ‘666’ tattoo

'This isn't satanic. It's an angel number.'

In a viral video, TikToker @kamiazmi says a Christian man harassed her as she took pictures in her apartment complex’s parking lot. She says he repeatedly tried to hand her a Bible after seeing her “666” tattoo.

“I see the ‘666’ on there,” the man, who’s off-camera, says in the video. “I know what it means, and if it’s demon possession, you need to know Jesus Christ is your savior.”

After repeatedly asking him to leave, she confirms with him that he works in the building. She later says that she told him her unit number because she’d been asked for it by security before.

“OK, so do I need to report you to the office for harassment?” she says. “Because you’re bothering me and I’m asking you to leave.”

After the man walks away, the user explains the situation. She says that the man walked up to her and asked her if she was OK, mentioning “human trafficking.” She told him that she lived in the building.

The TikToker says that after seeing her tattoo and upside-down cross on her skateboard, the man started to preach at her and attempted to give her a Bible.

“I’ve had plenty of people try to do that shit to me before, but he was so persistent,” she says. “Before I started filming, he would not leave me the fuck alone.”

She also clears up the misconception about her tattoo.

“This isn’t satanic. It’s an angel number. But regardless, I don’t want your fucking Bible.”

While 666 is associated with the devil in the Bible, England-based psychic medium Shawn Stone told Parade that 666 is an “angel number” that is a sign to “shift your perspective to control negative thoughts and invite peace into your life.”

Many users in the comments praised the TikTokers’ handling of the situation and urged the user to report him to the office.

“SIS YOU HANDLED THAT SO WELL I ASPIRE TO BE AS CALM AND COLLECTED AS YOU,” one user said.

“If he actually works there please report him that’s so inappropriate,” said another.

Others criticized Christians, particularly men, that push their beliefs on others.

“I don’t think Christians understand that there’s other beliefs systems in the world that can coexist,” one user said.

“Men and Christians: ‘I don’t understand what no means sorry but here’s why you should do what I say,’” said another.

However, some Christians in the comments also criticized the man’s harassment.

“As a Christian dang I”m disappointed… like let a girl live.”

“I’m [Christian] but I will NOT push my beliefs on others, that was just disrespectful what he did. I’m sorry you had to deal with that,” another user said.

The Daily Dot has reached out to user @kamiazmi.