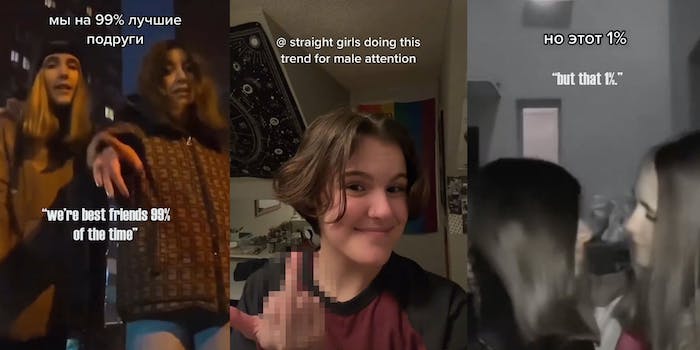 ‘Best friends 99% of the time’: TikTok trend called out for fetishizing queer women

'The way this makes me feel so invalid.'

A TikTok trend that shows women who are “best friends” kissing is under fire for fetishizing queer women and performing queerness for male attention.

Videos participating in the trend, which is set to the intro of Miley Cyrus’s song “23,” first show two women acting platonic with the overlay text “best friends 99% of the time” (or a variation of the phrase). When the song’s beat drops, the women lean in to kiss each other in slow motion, and the overlay text says “the 1%.”

The trend seems to have been started by @kstchnk__, a Russian TikToker, on March 23. Her video has been viewed over 575,000 times.

The overlay text in @kstchnk__ roughly translates to, “We’re best friends 99% of that time…but that 1%.”

Other videos that follow the user’s trend have more views than the original, such as videos from @user69083833396 (which has over 4 million views), @joyless.juulie (more than 1.5 million views), and @clara_.rf (1.3 million views).

Queer TikTokers have criticized the trend in the comment sections of many of the viral videos within the trend, calling it queerbaiting, a fetishization of queer women, and invalidating queer people in general.

“Y’all are literally just normalizing the fetishization of WLW [women like women] relationships for male validation to the point where if us actual WLW people are in public together men think we exist for their pleasure and force us to kiss infront of them,” @lesbian_opossum commented on @kstchnk__’s video. “And if we say no then they beat us.”

User @lesbian_opossum’s comment seems to reference the attack on Melania Geymonat and her partner, Chris, who were beaten on a London public transit bus after a group of men harassed them and asked them to kiss so they “could watch,” as the BBC reported.

“The way this makes me feel so invalid,” @lovefraaanzi commented on @joyless.juulie’s video.

Queer TikTokers have also made videos explaining why the trend is harmful and/or making fun of it. In a TikTok, user @ihatebleucheese calls the trend “f*cking gross.”

“I was literally outed and called disgusting by my close friends for being attracted to women and now these straight girls wanna make out and flaunt it all over social media for fun?” the TikToker wrote in the video’s overlay text. “Im tired of being mocked and belittled until it fits these girls narratives to be intimate with women. Fuck everyone [who uses the trend’s] sound.”

In an Instagram direct message to the Daily Dot, @ihatebleucheese said that the trend “hit close to home” for them because of the homophobia they have experienced from straight girls.

“I’ve even experienced in my own life, people not taking us seriously because of trends like this,”@ihatebleucheese told the Daily Dot. “It leads to more and more men thinking we’re performing our sexuality for them and for their validation.”

Similarly, in a message to “straight girls doing this trend for male attention,” TikToker @gayandsadasf flipped off the camera in a viral TikTok with over 11,000 views.

“Stop pretending to be queer to get validation from men,” they wrote in their TikTok’s caption. “It’s not a good look. WLW deserve to exist without being fetishized.”

Other TikTokers got creative with their criticism. Helen Landau (@notyourbubbe) made a TikTok parodying the trend by showing her and her girlfriend holding hands with the overlay text “us 99% of the time: dating.”

“Us 1% of the time: besties on public transportation,” Landau wrote in the overlay text over a video of her and her girlfriend riding a bus, not touching. By Thursday, Landau’s TikTok had over 715,000 views.

In a TikTok direct message to the Daily Dot, Landau explained that her video mocked the trend “because doing things such as kissing another woman in public are often very scary for WLW/sapphic people/lesbians.”

“These straight girls are using it to look hot for men and perpetuating the idea of queerness being trendy or an experimental phase,” Landau told the Daily Dot.

And while she said she agrees that “it’s OK for people to kiss whoever they want without defining their sexuality,” the trend feels “intentionally for an audience and for attention.”

“In a way that also makes it seem like kissing someone of the same gender is something naughty that requires that both people be drunk,” Landau said. “The behavior that puts actual queer people in danger can be applauded in people who are conventionally attractive, feminine, and straight.”