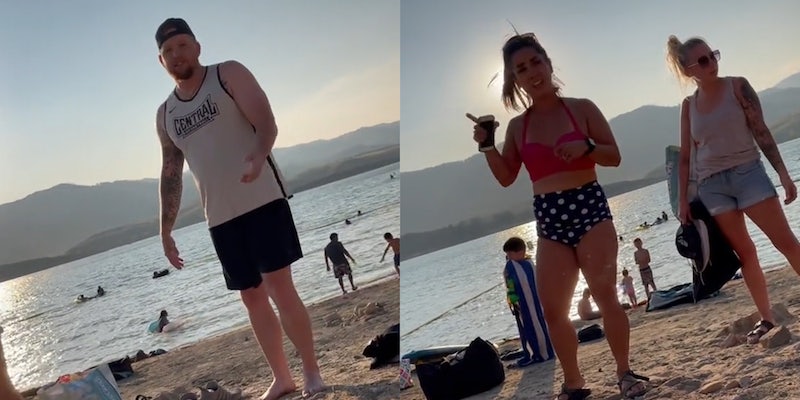 He said their beachwear is 'pornography.'

In a two-part viral TikTok, user @ggarbagefairy films a man coming up to her and a friend on the beach and asking them to cover up. The second video about the incident has amassed over 408,000 views and 68,000 likes since being posted Monday night.

In the first clip, the man approaches the women, who are apparently total strangers to him, and asks them to cover up their swimsuits because what they’re wearing is “pornography.” He says there’s “free will in America” and that “if men of God don’t stand up, then our society is going to go down the drain.” The women respond that they’re atheists.

In part 2, the man continues to berate the women for “showing off their bodies.” When asked what kind of bathing suit he personally deems appropriate, he responds, “A one-piece or a two-piece that actually covers your body.”

The women repeatedly ask him to leave them alone, and he eventually leaves halfway through the video—but not before scolding them one more time. “There’s gonna come a day when you’re gonna have to come face-to-face with God,” the man says.

“What about ‘thou shalt not judge,'” one of the women says, referring to a well-known decree in the Bible.

Another woman who had been watching with her kids nearby then swoops in and berates the women for swearing loudly.

“When you swear in front of my kids, that’s where I draw the line,” she says. She then piles on to the outfit shaming. “It does matter what you wear,” she says, “because you need to value yourself.”

In the video’s comments, the TikToker promised more details to come. “I’m gonna try to post an explanation vid tomorrow showing what we were wearing and giving some more context,” she wrote early Tuesday ago.

The Daily Dot reached out to @ggarbagefairy for comment via TikTok message.