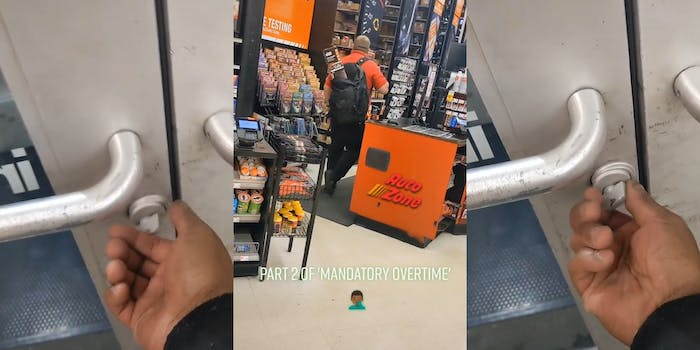 ‘I was trying to leave and the door won’t open’: AutoZone Worker Says He Was Stuck Inside Store In Viral TikTok

'Can’t pay me enough to sleep overnight in Autozone.

An AutoZone worker says he and a co-worker were stuck in their store at night because the lock to the front door was broken. He shared the funny saga on TikTok.

TikToker @duff_mateo_alex posted the clip on June 21 on TikTok where it has gained over 233,500 views.

“So apparently we’re locked inside of the store,” he says, filming the entrance of the store. “I was trying to leave and the door won’t open. The lock is messed up.” He then jiggles the lock. “Oy. Yeah so, um, looks like me and Tyler are spending the night.”

“Hope you like cuddling,” a man who is likely his co-worker, Tyler, jokes.

In another post he titled “part 2 of ‘mandatory overtime,'” the TikToker says his co-worker is going to climb out the window and “release me from the other side.”

In a third video, the TikToker shows a clip of a street cleaner leaf-blowing the ground outside the door.

“This is the outcome of me trying multiple times to get the street cleaner guy attention to help me out and he just ignored me,” he wrote in the caption.

In the comments, the TikToker shared that this happened at 10:30pm. He also clarified in a comment that they were only stuck inside for about 20 minutes.

Some viewers commented that there must be another door or at least some tools for them to break out. The TikToker responded, “I had Tyler break a back window and climb out, to open the front door.” He explained in another comment that Tyler used pliers as a hammer to try to knock the lock out of place.

Apparently, in another video, a customer comes by, tries opening the store from the outside, and allegedly asked if he could purchase something.

“Told him I’d rather stay locked in than open my registers back up,” the creator jokingly wrote in the caption.

On Thursday, @duff_mateo_alex posted another TikTok joking that he has been locked inside for a week. “I think my kid is starving. That or my dog. Or maybe one ate the other, I don’t know,” he says.

The Daily Dot has reached out to @duff_mateo_alex via TikTok comment.