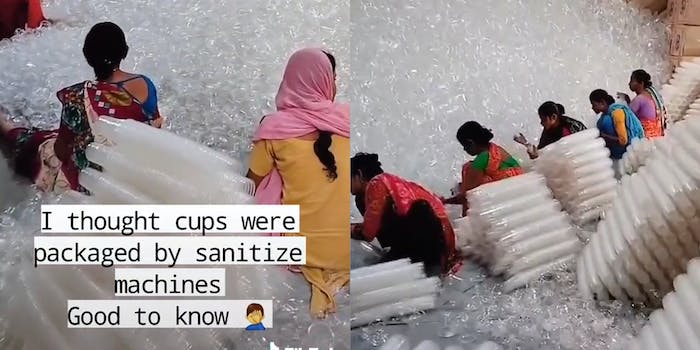 “I thought cups were packaged by sanitize[d] machines, good to know,” Eric Mina (user @ericmagicmina) wrote via text overlay on the video.

Mina’s video shows several women crouched at the base of a large pile of plastic cups as they package plastic cups by hand. It received over 5.4 million views and thousands of comments.

Several users questioned whether or not this method of packing is sanitary.

“Yeah this just isn’t sanitary, that garbage company should provide a mask, hairnet and gloves at MINIMUM…. That’s a fact,” one user said.

“Nooo now I can’t unsee this!! These were the only thing I didn’t have to wash” another said.

However, many others expressed concern for the workers’ well-being and pay rate.

“Ya worried bout the cups not being sanitized… ya don’t see the condition they working in… you kno they get paid less then 1$ to do this all day,” one user said.

“That’s a job needed for them to feed their families, God bless all of them,” a third said.

Though, some users still emphasized the cleanliness issue in response.

“Yeah but the point is they’re putting bare feet and hands on the cups people drink straight out [of] the package from,” one user responded.

Many denied others’ concerns about sanitization of the cups.

“We’ve all been drinking from these cups forever and we’re still here, all healthy,” another said.

Others doubted that the plastic cups would be any more sanitary if the cups had been packed by a machine.

“These comments. Like automated packing equipment instantly sanitizes things. … Some of y’all have never stepped foot in a factory,” one user said.

The Daily Dot reached out to Mina via TikTok comment.