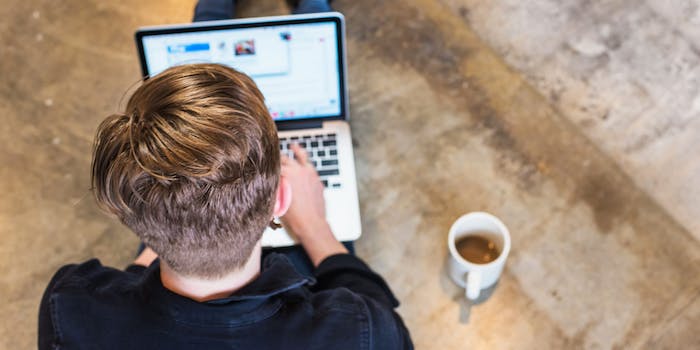 Right-wing Twitter is trying to report sex workers to the IRS.

Right-wing Twitter users have a new harassment campaign, and it’s targeting sex workers. Using the hashtag #ThotAudit, men are encouraging each other to report online models with premium, adult-only Snapchats and Instagram accounts to the IRS for a tax-fraud payout. But their plan isn’t very thought-through.

The #ThotAudit hashtag began after popular right-wing online personality David Wu encouraged his followers to “report all these ‘sex-workers’ to the IRS or the local law-enforcement'” and then provided instructions on how to do so. The latter post quickly went viral, with over 18,000 shares across Facebook.

It didn’t take long for right-wing figures to quickly join in, using the hashtag to screenshot sex workers’ accounts and report them to the IRS.

“Men are aggressively organizing to report all thots. I don’t blame them: these girls are getting a free ride via beta bux and a broken sexual marketplace that is rigged in the favor of females,” Daryush “Roosh V” Valizadeh tweeted, one of several prominent misogynists in the men’s rights activist manosphere.

Others flocked to the hashtag after they realized the IRS offers up to 30 percent of due taxes and penalties to whistleblowers.

The thot is immunized against all dangers: call her a scoundrel, swindler, it all runs off her like water from a raincoat. But call the IRS on her and you will be astonished at how she recoils, how injured she is, how she suddenly shrinks back: “I’ve been found out”. #ThotAudit

There are several problems with the #ThotAudit brigade’s plan, though. First, is the assumption that camgirls, models, and escorts never pay their taxes, which is not true. Then there is the notion that ThotAuditors can simply grab sex workers’ “premium Snaps” and send them over to the IRS. In reality, whistleblowing is much more complicated, and there’s a strong likelihood that right-wingers reporting sex workers to the IRS will be unable to fill out the whitstleblower form at all—or run the risk of committing perjury if they do so.

Attorney Christopher Kirk works with sex workers as part of Safeword Tax Service, a sex worker-inclusive tax planning and return preparation service. In an interview with the Daily Dot, he explained that an audit “could have a huge impact” on a sex worker, but that an online troll isn’t likely to trigger that audit.

“An audit being triggered by an incel troll filing a Form 211 is highly unlikely,” Kirk told the Daily Dot. “The information required by the IRS is pretty detailed, and includes the person’s legal name, address, date of birth or approximate age, relationship between the informant and the taxpayer, and amounts believed to be owed.”

Even if a #ThotAudit supporter somehow provided a credible application to the IRS, it’s incredibly unlikely that they’d receive a huge lump sum. There’s only a maximum award of 15 percent for up to $10 million if the whistleblower’s report targets someone making less than $200,000 and owing less than $2 million. So while a whistleblower could theoretically receive a reward, it will be vastly smaller than the 30 percent figure touted by #ThotAudit’s Twitter users.

Oh, and you can’t just fill out a form and send it in online. The whole process is done by mail and it can take a long time for an audit to be processed or for an award to come through. It isn’t anonymous either, as the IRS can publicly out you as a witness in the case of a tax fraud situation.

“The claimant has to provide their own identifying information, and sign under penalty of perjury that the information is correct,” Kirk explained. “The IRS website on whistleblower claims says that they are looking for actionable information, not supposition, and that the program is not for people with an ax to grind.”

I pay taxes. I'm not worried. But for those of you who are stressing the David Wu #ThotAudit drama, consider this: THIS is the form the IRS requires to report tax fraud. Do you seriously think the #ThotPatrol has access to this information about you? They're just internet trolls. pic.twitter.com/HrEVnydo5B

Here, I started filling out the appropriate IRS forms for you. #ThotAudit pic.twitter.com/rDR7UFrOnG

“Hello, IRS? yes I would like to report a sex worker for not paying taxes. Legal name? Yes her legal name is SLUTTY_BECKY98. Did you get the underscore? There’s an underscore.”

If you actually attempt to report internet sex workers to the IRS vindictively (I doubt any of you jack offs are), without any real proof, you are likely to get in even more trouble. It is falsely reporting a crime. Which is a crime dummies.

To those thinking they will receive some cash reward for reporting… pic.twitter.com/pr97ui44JH

Back to that other myth running rampant around #ThotAudit: Plenty of sex workers pay their taxes regularly, file on time, and know they have to report their earnings quarterly if they work as self-employed models, camgirls, and escorts.

“Most sex workers I’ve spoken to are aware of the requirement to file tax returns, and to pay taxes,” Kirk told the Daily Dot. “However, I believe that many sex workers are misinformed as to particulars (for example, the notion that they don’t need to report income if they were paid in cash or didn’t get a 1099, or the idea that ‘gifts’ received from a client are not income). The bottom line is, if you are engaging in an activity for money, the proceeds of that activity, whether money or goods, are income, and are supposed to be reported on a tax return.”

Despite what Roosh and other #ThotAudit users claim, sex workers pay their taxes just like anyone else, and having a “premium Snap” doesn’t necessarily mean someone is receiving money under the table.

You must not follow many #camgirls if you think we don’t pay taxes. March is nothing but tax filing posts and pics of boxes full of receipts. Most of us follow the rule of putting 30% of each check away for taxes. 🙄🙄🙄 #ThotAudit

I only occasionally pay attention to trending hashtags and was surprised by #thotaudit being a thing today. I’ve actually talked taxes with nearly every model I’ve shot with and have referred several my accountant. What makes people just assume SWs don’t pay taxes?

I think if these #ThotAudit guys were getting laid like our clients are, maybe they would chill out. I’m not sure what makes them think we don’t pay taxes. How do they suppose we prove our income to buy a car or rent an apartment? They’re wasting their time on small fish.

Lol, someone is legit trying to report me to the IRS. 1) I work above-the-table & have a tax accountant. 2) You don’t have the necessary info to report me.

But, yeah, if you’re trying to use the IRS to prevent someone even talking about #ThotAudit, you ain’t libertarian. Bye. https://t.co/C7vRdtq5Ls

Then there’s the hypocrisy of the matter. Right-wingers are eager to report sex workers to the IRS, but they don’t care that the president of the United States refuses to disclose his tax returns. The #ThotAudit isn’t about taxes, it’s about attacking women and sex workers for having control of their bodies.

Scrolling the #thotaudit tag and seeing a LOT of familiar MRA faces.

Because nothing says "Men's Rights" like attacking sex workers.

It's blowing my entire mind that the SAME EXACT PEOPLE who think Trump is a genius for hiding his tax returns – are desperately reporting camgirls to the IRS for allegedly not paying enough in taxes.

Maybe it's more about hating women and not actually about taxes? #ThotAudit https://t.co/6Z72bmgis4

Men reporting sex workers isn't about paying taxes. It's about salty boys being mad that women can do anything with their bodies and partake in an industry that they can't benefit from.

Lemme get this straight… dudes who was mad AF backpages went down are now snitching their ex’s premium snap to the IRS? Y’all a whole new type of different huh? #ThotAudit

So apparently incels are reporting sex workers online to the IRS under the name “#ThotAudit.”

The level of immaturity and sheer sexual frustration it would take for a guy to attempt to weaponize the state against a woman who hasn’t done anything to him is alarming.

Case in point, Twitter user DammieItsCammie posted a series of chat logs that claim #ThotAudit’s founder sexually harassed teenage girls while in his 20s. In one chat log, Wu receives seemingly explicit photos from a 16-year-old girl after he asks if he can “see more of you though.. uncensored.” He proceeds to lash out at the teen for dating another man, saying she “can’t be a slut and get the fuck away with it.”

Another user claims Wu “tried to tell me to send him pics” while she was 17 and a third said he “was asking [for] pictures of me [when] I was either 14 or 15.” The receipts suggest Wu has a misogynistic and predatory history to boot, one that may be fueling #ThotAudit.

“Fuck reporting to the IRS, time to report this dude to the police,” DammieItsCammie tweeted.

#ThotAudit is ultimately about intimidating sex workers. It uses the threat of an audit to silence sex workers who do accept money under the table, and it encourages dogpiling and online harassment against models and escorts simply for how they make a living. Whether a sex worker owes taxes doesn’t matter; it’s the fact that they do sex work that makes them criminals in the eyes of #ThotAudit.

“The stigma for sex workers remains strong and it is something that many women, men, and transgender people have grouped together to fight for the liberty and freedom to make a safe, consensual living,” one retired cam model told Motherboard. “It saddens my heart that we still live in a world of such malice, but many people have been banding together to try to stop this and to support one another even stronger.”

One can only hope that calling out #ThotAudit for what it is—sexual harassment—will bring sex workers and their allies closer together.