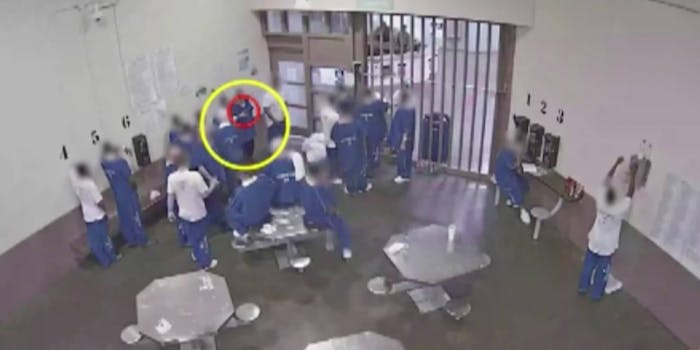 In the video, a group can be seen drinking from the same water cup and wearing the same face mask.

Inmates at a prison in California reportedly infected one another with the coronavirus in the hopes of being granted an early release.

L.A. County Sheriff Alex Villanueva, according to TMZ, stated on Monday that more than 20 inmates at the Pitchess Detention Center in Castaic purposely tried to catch COVID-19 last month.

Villanueva noted that an investigation had been launched into the matter after the prison saw an unexplained and significant spike in cases.

After reviewing countless hours-worth of footage from inside the prison, Villanueva says investigators found evidence of inmates attempting to spread the disease.

“It’s sad to think that someone deliberately tried to expose themselves to COVID-19,” Villanueva said. “Somehow there was some mistaken belief among the inmate population that if they tested positive that there was a way to force our hand and somehow release more inmates out of our jail environment — and that’s not gonna happen.”

Although prison officials confronted the inmates from the video, none would admit to the scheme. It remains unclear how the disease first made its way into the prison.

The Los Angeles Times reports that 357 inmates in L.A. County jails have tested positive for COVID-19 thus far. Although thousands of people have been released early in an attempt to stop the spread of the virus, critics argue that much more could be done to protect the health of the incarcerated.